600,000 farmed salmon die of disease in BC annually — with what effect on wild fish and human health?

Dig into the mass of data produced by the Cohen Commission that closed in 2012 (full name: the Commission of Inquiry into the Decline of Sockeye Salmon in the Fraser River) and you find a rather unassuming Technical Report  by Josh Korman of Ecometric Research.

Given what Mr. Korman reveals in his report, it’s good that the Monterey Bay Aquarium’s Seafood Watch program (and its Canadian analog, Seachoice) continue to list farmed salmon as a red “Avoid” for consumers:

Over the last five years, an average of 32 million fish per year were held in net pens in BC waters, and 91% of these fish were Atlantic salmon. Approximately 3 million fish died each year on BC salmon farms (12% mortality rate) over this period, with 20% of that mortality comprised of fish classified as ‘fresh silvers’, which potentially died of disease. Thus, an annual average of approximately 600,000 farmed salmon potentially died due to disease….

Across all farms between 2003 and 2010, an annual average of 30 fish health events that indicated the presence of high risk diseases to sockeye salmon (Furunculosis, infectious hematopoietic necrosis virus, bacterial kidney disease, and Vibrio), were reported by industry. 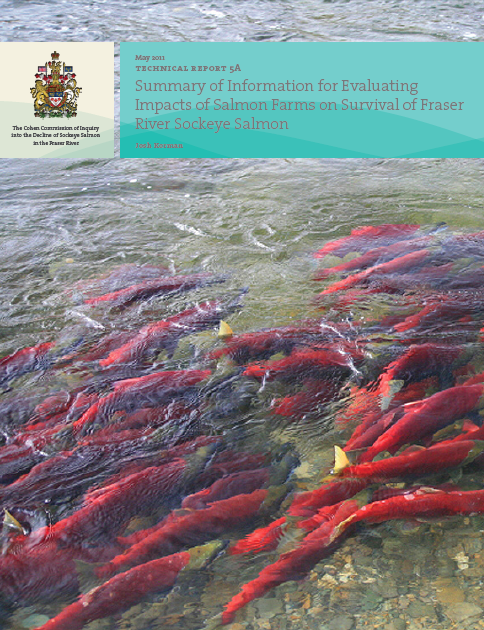 An average of 30 annual outbreaks of “high risk” salmon diseases occur amongst these farms. How many of these diseases go undetected, with diseased fish ending up on consumers’ dinner plates?

These outbreaks annually kill off 600,000 farmed salmon. What effect do these viral and bacterial diseases have on wild fish, from herring to Pacific salmon (Coho, Pink, Chum, King and Sockeye)? Are these outbreaks part of the reason 90% of migrating salmon in BC die before returning to their natal rivers?

The answer is unknown, since neither industry nor the federal Department of Fisheries and Oceans—despite over a decade of calls for such research— has undertaken to study it.