BC's rivers, lakes and coastline are an integral part of our lives on the west coast. Watching people paddling under the setting sun at MEC Big Chop; hearing people's powerful memories on the water at beach-clean ups; and being involved in Our Water BC during the provincial election has made us realize how deeply passionate people are about water--our life source. At Fraser Riverkeeper, we believe that a swimmable, drinkable, and fishable future begins with community. When citizens are engaged on local water issues and have the resources and tools in order to take action, boil water, swimming and fishing advisories will be things of the past. 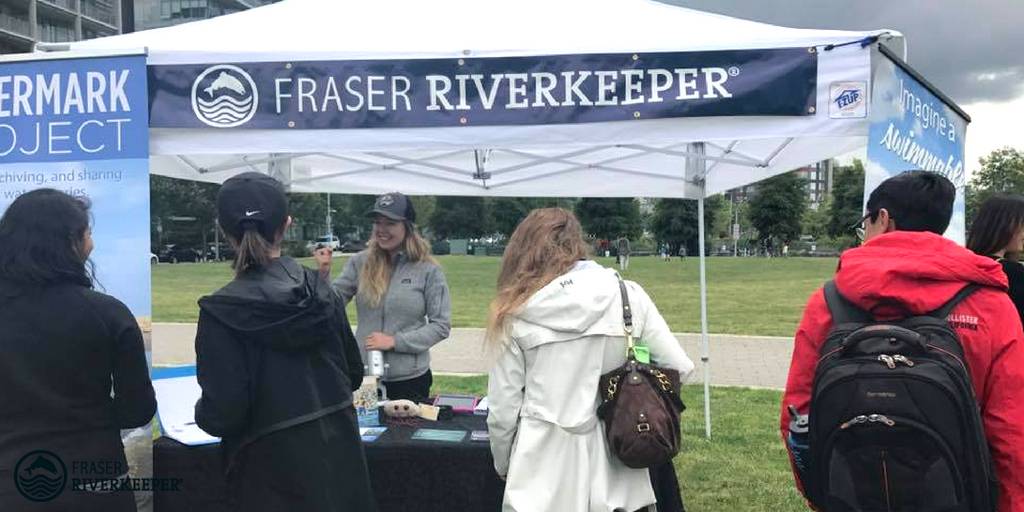 Griffin Kelly, Researcher at Salmon Coast, reflects on past events that celebrated water.

On June 8th, Salmon Coast Field Station participated in Port Hardy’s World Oceans Day celebration. A large portion of the economy of Port Hardy, like many of the surrounding communities in the North Island, depends on fisheries and their subsidiary industries. Residents interact with the Pacific Ocean on a regular basis and many depend on it for their livelihood, giving World Oceans Day an added layer of significance. Salmon Coast Field Station, along with other conservation groups and government representatives, like the Coast Guard and Fisheries and Oceans Canada, were in attendance at the event. The majority of attendees were children from local elementary schools.

A major topic of discussion at the event was the Stream to Sea program. Stream to Sea was a DFO-funded project, which allowed classrooms in BC to raise salmon from eggs to fry, and then to release the juvenile fish into a near-by river or estuary. The funding to the program was recently cut and the program will be discontinued. Local teachers at World Oceans Day expressed that Stream to Sea was an strong promoter of aquatic and ecological knowledge. Many of the kids that visited the SCFS booth already had vocabulary to describe salmon (fry, smolt) and knew of their life cycle and migration patterns. The kids’ enthusiasm for learning about salmon and sea lice made the decision to cut the program even more disheartening. World Oceans Day is an excellent opportunity for youth to interact with conservation groups, but it only occurs once a year. To raise salmon in a classroom is an unparalleled experience, as it develops an intimate connection between children and their nearby environment. It is crucial to foster environmental stewardship and an awareness of one’s surroundings from a young age.

In my project interviews over the past few weeks, I have spoken with commercial fishers who have expressed the importance of their personal connection to the ocean and their fishery. This relationship stems from their lived experience on the water, shared community heritage, and their family’s historical participation in the salmon, prawn or other fishery. I have met several third or fourth-generation fishers who feel that their family’s way of life is in danger. As the commercial fishing industry shrinks, connections between individuals and the ocean will have to be fostered in alternatives ways. The Stream to Sea program is a perfect example of this, and the loss of the program will be felt by local communities.

Due to public outcries, DFO reversed their decision to cut funding to the Stream to Sea program. This shows the power of public opinion -- we are pleased that the refunding will continue to help educate and inspire future water leaders.

This weekend marked the 59th annual June Sports festival, a soccer tournament and cultural celebration in Alert Bay, Cormorant Island, BC, hosted by the ‘Na̱mg̱is First Nation. 38 soccer teams from around BC competed in the tournament. June Sports attracts teams from Vancouver, Cowichan, and Squamish, and it also brings together spread-out North Island communities like Port Hardy, Port McNeill, Kingcome Inlet, and Gilford Village. Salmon Coast researchers and staff went to Alert Bay to volunteer at the event.

The weekend opens with the Salmon Prince and Princess Pageant, where youth from the community share their Kwakwa̱ka̱’wakw cultural knowledge and Kwak̓wala language skills. The prince and princess were crowned at the opening ceremony of the festival. Organizers of the pageant state that the event began to promote cultural awareness among young people, and now is an opportunity for cultural sharing within the community.

The centrality of salmon in the pageant and the weekend festival echoes the importance of fish in the community; Alert Bay was historically supported by the salmon fishery and now the ‘Na̱mg̱is First Nation owns the first North American closed containment fish farm, Kuterra. Closed containment farms are often advertised as the sustainable future of aquaculture, as they prevent any form of sea lice or disease cross-contamination and waste spillage into the ocean. Norway has recently halted expansion of open-net pen aquaculture and will focus on closed containment development. The majority of BC farms are owned by Norwegian companies, and their change gives hope to communities in this territory that a similar shift could happen here. 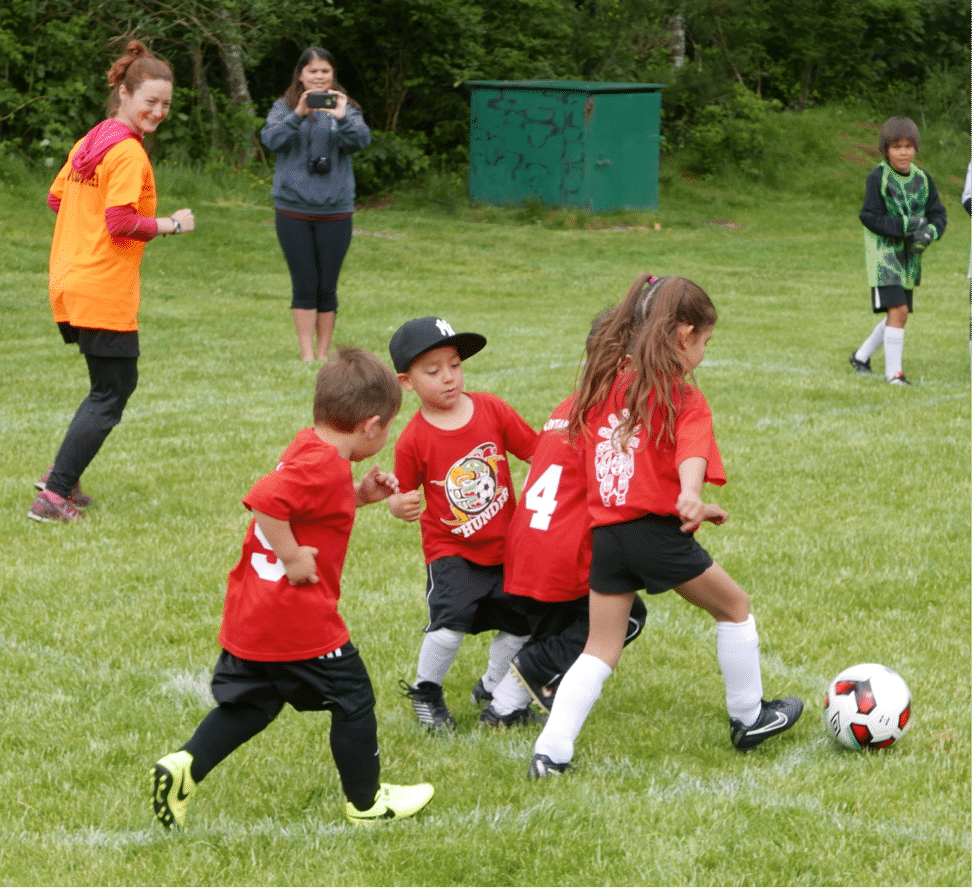 SCFS volunteered as referees for the U5 (kids five years old and under) tournament.