Dipping my Cup in Arctic Waters

When I was 18 years old I got the opportunity to go on a 52-day canoe trip with my summer camp. Alongside 7 other campers and 2 leaders, we travelled to our starting point on Tibbitt Lake in the Northwest Territories.

Carrying all our food for the next two months (our biggest pack weighing roughly 180 lbs), with limited communication to the outside world, and only barren hills as far as the eye could see, it was up to us to travel over 900 km by canoe to our finish point, a small town on the Arctic Ocean, Kugluktuk, Nunavut.

It has been 6 years since this summer, isolated in the north, but the people, memories, and landscape come back to me almost on a daily basis. What strikes me often is how the dozens of lakes and rivers we portaged between and paddled on ripple through my memory as if they were people on the journey with us. Gordon Lake played rough with us, with strong winds and long days of paddling. Point Lake made us feel at home—we became so comfortable in its wide-open landscape that as it narrowed we wondered if we might just stay on its big sunbathed rocks forever. And the Coppermine River was big and powerful, never letting us know what was around the next bend. 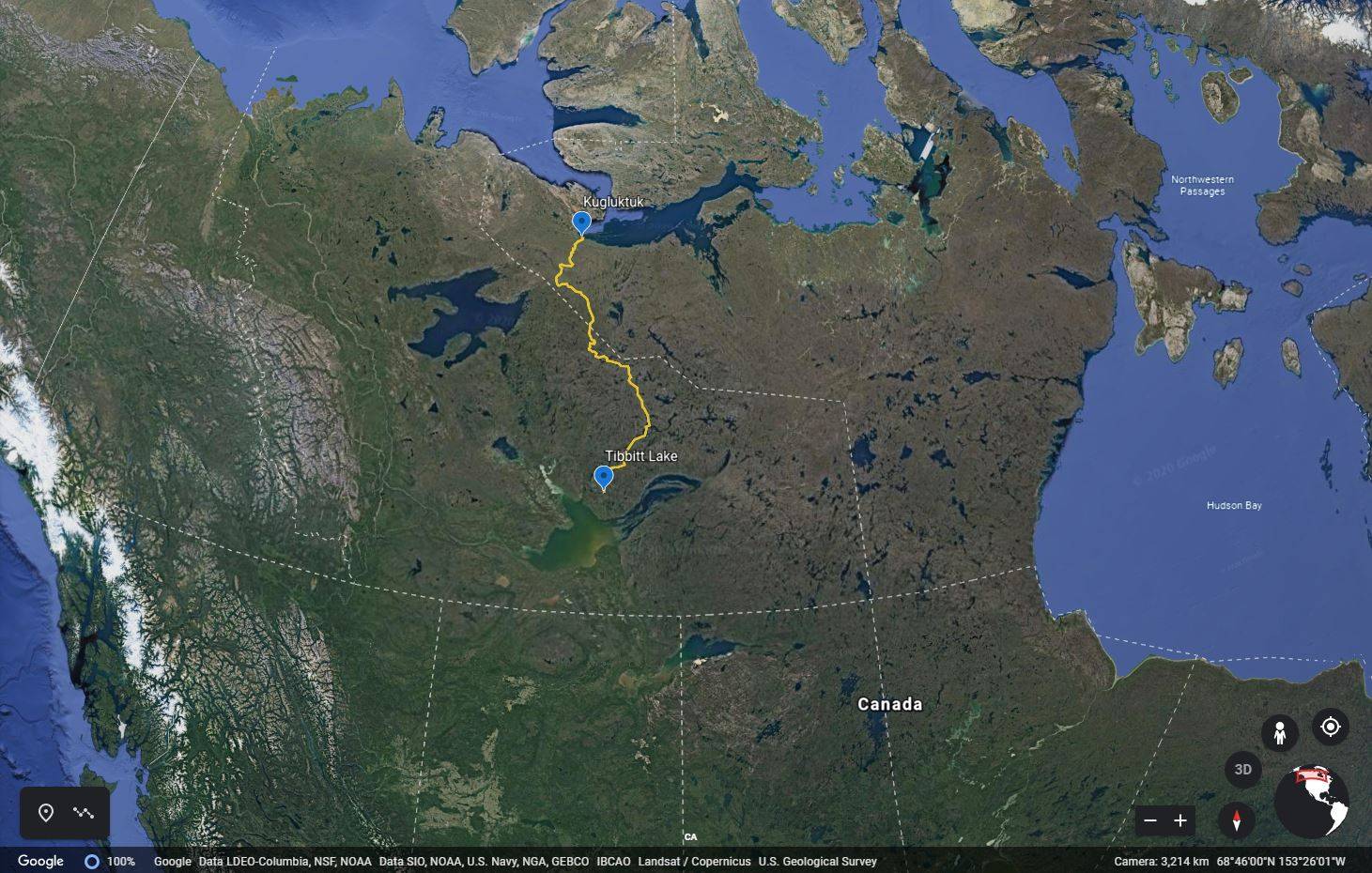 Our route, in yellow, from Tibbet Lake to Kugluktuk.

When I came back from these 8 weeks away from “civilization” as I knew it, away from life’s many distractions, and smelling like I had only taken 30-second dunks in the frigid arctic waters for the whole summer, I had changed forever. My perception of what was important in life changed. My appreciation for Canada’s protected and untouched wilderness grew. And my relationship with water deepened.

After two weeks on the water, we were getting pretty tired of treating our drinking water. Paddling further and further from the last signs of human life, the inconvenience of making potable water became a hassle. After all, treating water for 10 people, and carrying that precious water on multiple portages each day took a lot of effort. I can remember the first day someone brought up the idea of simply dipping our water bottles into the lake, and not treating our drinking water at all. It was risky but so tempting. We discussed this for a whole afternoon, our five red canoes pacing with each other as we worked out the issue. On the one hand, we could get Giardia (beaver fever) and be far away from all the comforts of home. But on the other hand, the waters felt untouched and crystal clear, with swift currents and cool temperatures, perfect for drinking.

Over the next few days, one by one, we began timidly dipping our bottles into the lake and drinking it as it was. Those first few times felt wrong. Growing up in Ontario, and paddling the busy waters in Temagami and Georgian Bay, it had always been frowned upon to drink the water without treating it; beaver fever was almost certain. But the waters up here were different. And they tasted like heaven. 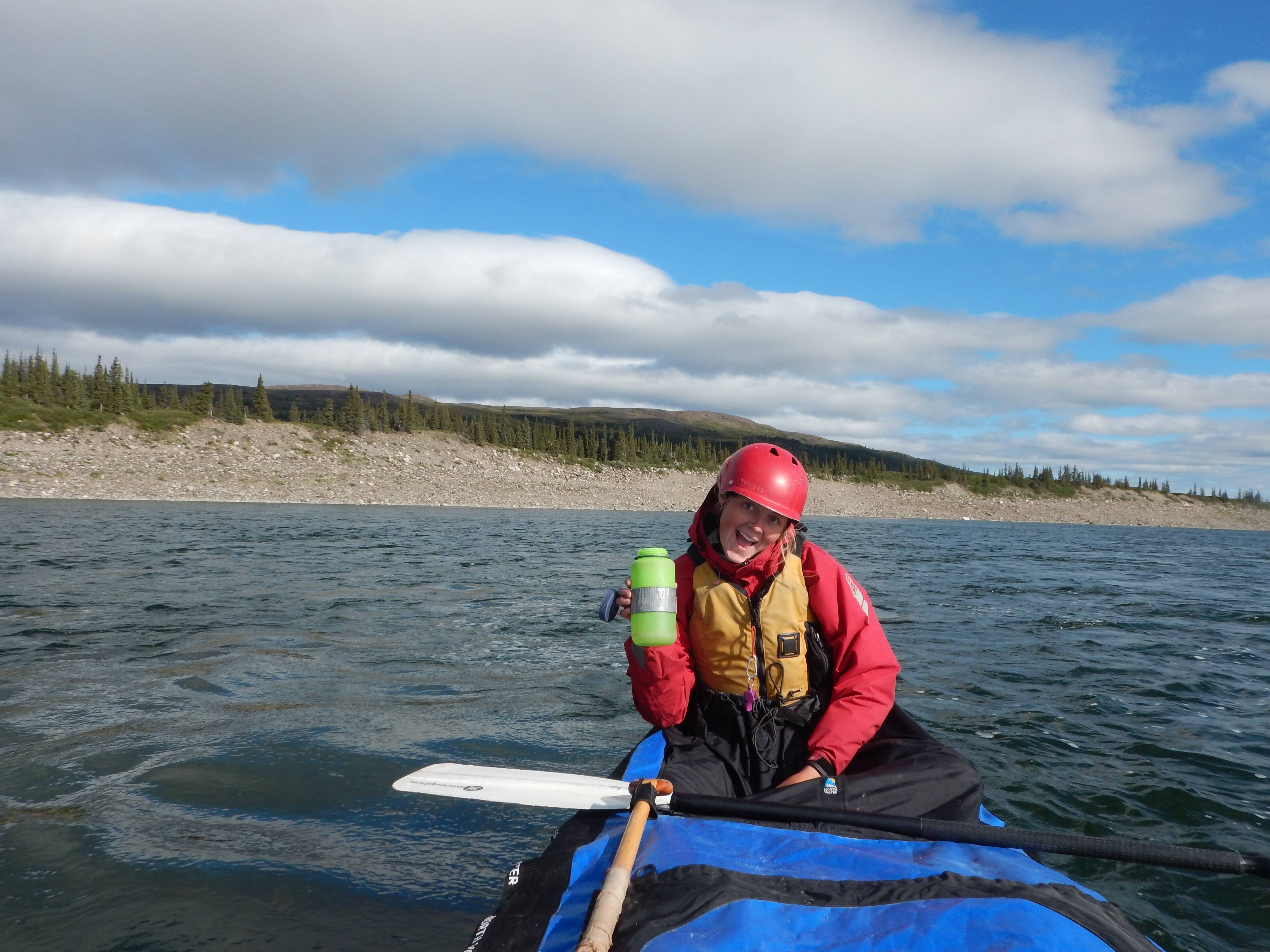 That's me with a full bottle of delicious, untreated water from the Coppermine River!

Pretty quickly, we wouldn’t even think twice about drinking straight from the lakes and rivers we were paddling. It occurs to me now that the idea of drinking straight from the fresh-waters that flow in Canada is something that many Canadians will live their entire lives without doing, and for good reason. Drinking water advisories, waters poisoned by industries, our bustling urban centres, microplastics, E. coli and Giardia are all serious concerns for most communities in Canada. I can’t help but wonder how we got here, and if future generations will ever be able to confidently dip their cups and bottles into our glorious lakes and rivers without fear of illness.

Today, I savour the exceptional opportunity I had to connect with water in this far too uncommon way. And I savour the knowledge that there are organizations and individuals working towards a future where all Canadians might live without fear of drinking the water that flows from their lakes and rivers and into our taps.

Julia Pepler is the Digital Content Coordinator for Fraser Riverkeeper and Swim Drink Fish. She is thrilled to put her enthusiasm for design and communication towards Swim Drink Fish's mission for a swimmable, drinkable, fishable future.