Deep in the Rocky Mountains of British Columbia’s Mount Robson Provincial Park there is a dribbling spring. This backcountry stream forms the source of the mighty Fraser River, British Columbia’s longest and most prolific waterway.[1]

Throughout its impressive 1378 kilometers in length, the Fraser River encounters British Columbia’s vast variety of territory. From mountain to forest to desert to rainforest and more, the Fraser River Basin spans approximately a quarter of BC’s land area and collects water from 34 interdependent riversheds.[1] Since time immemorial, the Fraser River has played a central role in the lives of the indigenous people of BC and continues to be an undeniable part of culture in BC, with 67% of our population living within the river basin.[2]

The Fraser River has gone by many names long before “The Fraser.” The mighty river is called “Sto:lo” in Halqemeylem and “Lhtakoh” in the Dakelh language, both meaning “river” in their respective languages. To the Tsilqot’in people, the Fraser is appropriately named “ʔElhdaqox,” meaning Sturgeon River, in reverence of the captivating and prehistoric fish that traverse the waters of the south Fraser.[3]

Fed by heavy rain, snow fall, and glaciers, the Fraser’s humble beginning is slow and loopy as it flows north from the mountainous Fraser Pass. From a trickling mountain stream into a meandering river, it weaves through the Robson valley between the Cariboo and Rocky Mountains. The first river to join the Fraser is the glacier-fed McGregor River. Around Prince George, the Fraser takes a 90° angle and heads south. Just after this bend, the Salmon, Willow, Stuart, and Nechako Rivers join the river from lakes to the north and the Fraser gains momentum and sediment load as it progresses south. 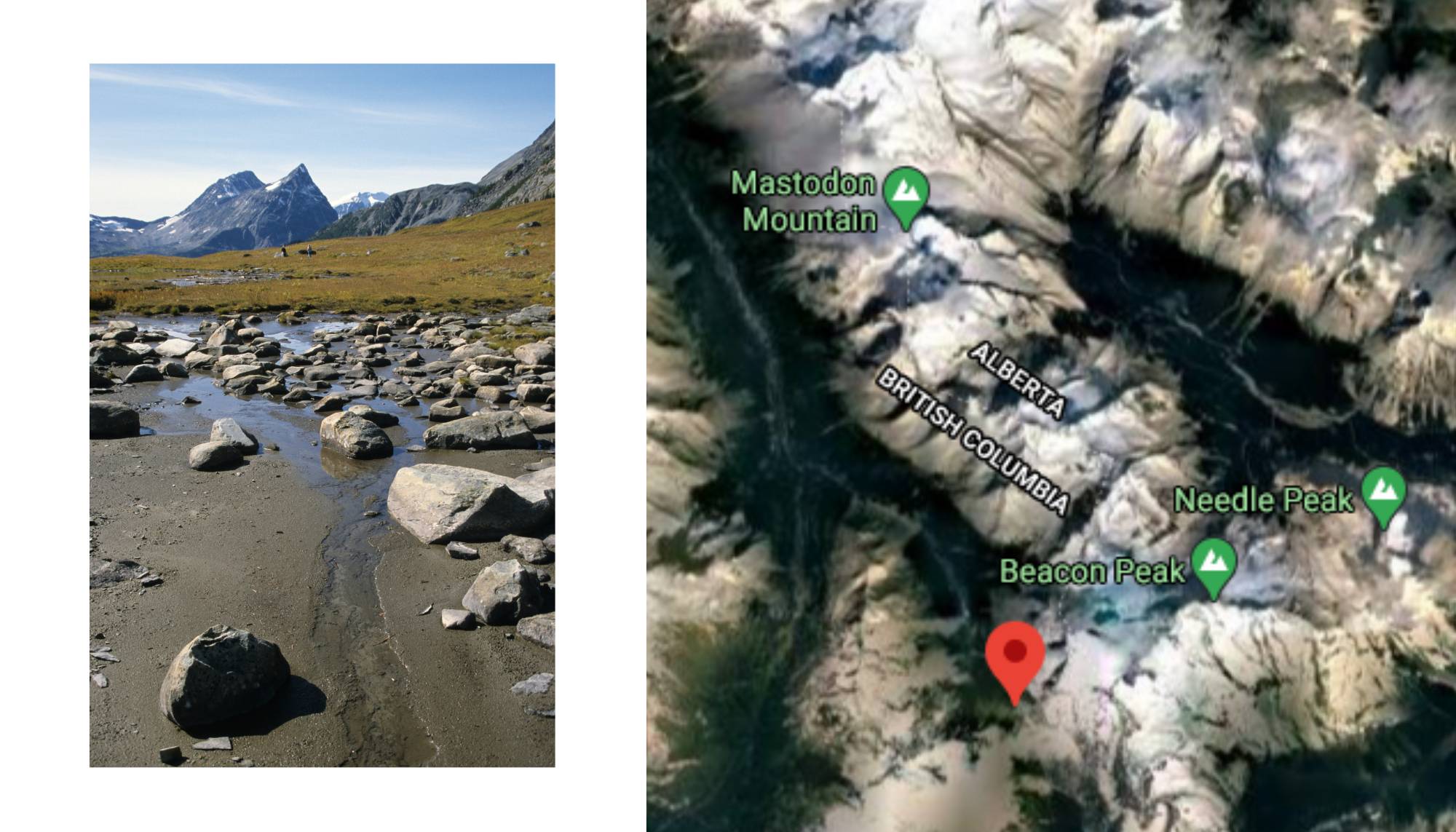 Suddenly on a new trajectory, the Fraser River is surrounded by dense forests and met by three rivers. Joining from the Chilcotin territory to the west is the Blackwater River, named for its nutrient-rich, black tea coloured water. The 280 km long Blackwater River was once called the “Grease Trail” after the Eulachon (small fish) grease carried by indigenous traders along the river system from Bella Coola to the interior.[4] Next is the Cottonwood River, which flows from the foothills to the east. The Cottonwood river was traveled by gold seekers, or perhaps more appropriately referred to as “the hungry people” – indigenous slang for those who flocked to the areas during the Cariboo gold rush of the 1860’s.[5]The town of Quesnel formed around the confluence of the next river, the Quesnel, which flows from the massive Quesnel Lake in the Cariboo mountains.

Passing by hoodooed hills and sage shrubbed tablelands, the Fraser carves through the central interior. About 150 km south of Quesnel, the Chilcotin River springs forth from the Chilcotin Plateau to the West. The Chilcotin River looks like the set of a Western is known for its world-class white-water rafting. The Fraser narrows and quickens through this arid region, often shearing off the banks of the river with it – like it did at the Big Bar Landslide in 2019. It isn’t until after a gnarly series of rapids that the Fraser is joined by two rivers flowing from the coastal mountains to the town of Lillooet. The Bridge River and Seton River both support a series of hydroelectric dams built by BC Hydro.

Just downstream, as the banks of the river turn a rusty ochre red, the now opaque green-brown Fraser River is met by two brilliantly blue rivers, the Stein and the Thompson Rivers. The Stein River, which begins at the remote Tundra Lake, is named after the Nlaka’pamux word “stagyn”, meaning “hidden place.” Its name refers to the river’s deceivingly modest confluence with the Fraser.[6] Downstream, the confluence of the clear, blue Thompson and the muddy Fraser River is a feast for the eyes as the two waters fuze into one. The Thompson River is the Fraser River’s largest tributary and until not long ago, supported one of the largest Sockeye salmon runs in the world via its tributary, the Adams River. Habitat loss and obstruction, overfishing, and a variety of other factors have caused a major decline in both Fraser River Sockeye and Chinook stocks in recent years.[7] 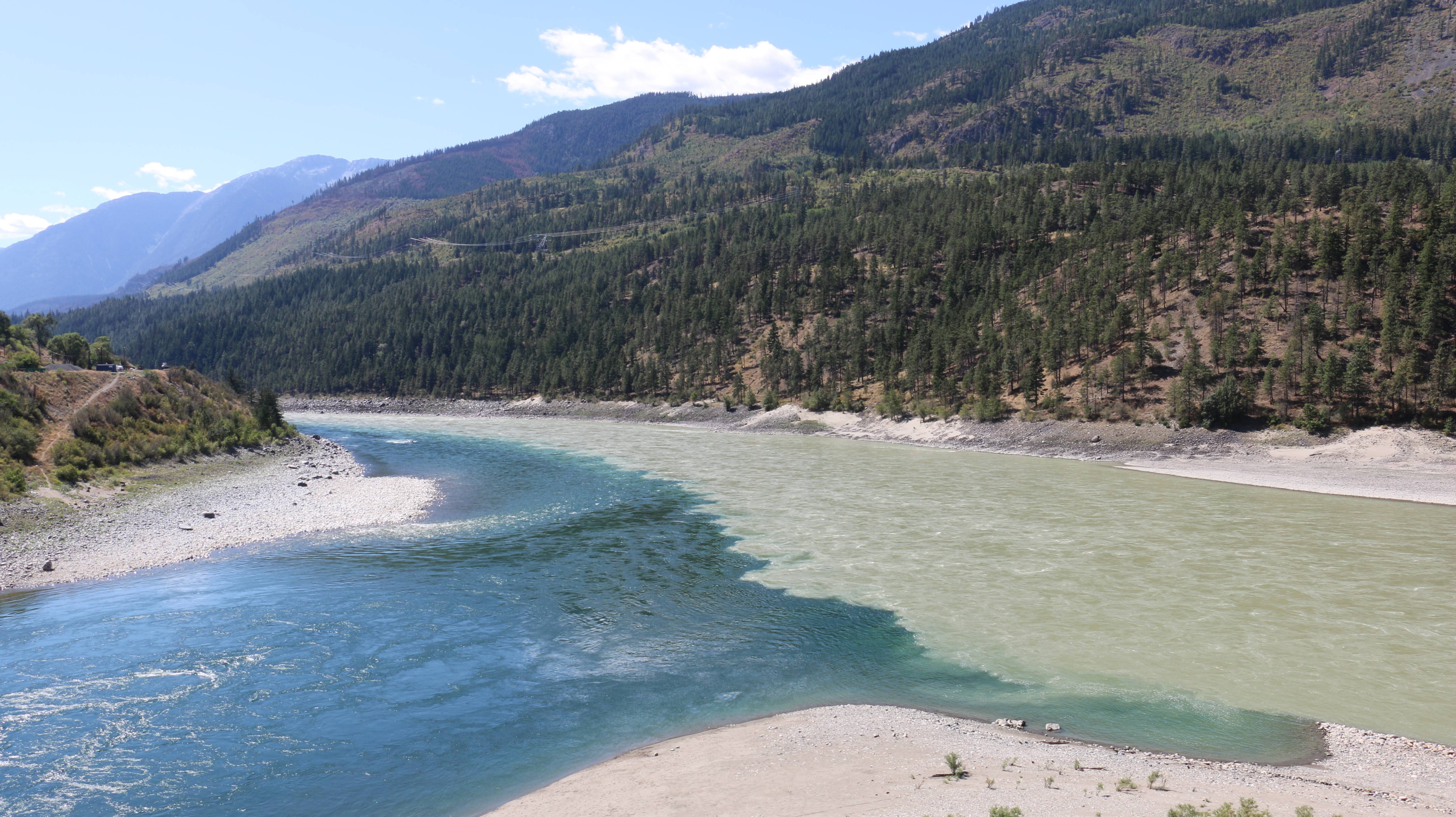 Image: Where the Thomspon Meets the Fraser

Following the confluence of the Nahatlatch River around Lytton, the Fraser River approaches a deadly stretch of water known as the Fraser Canyon. From the town of Lytton to Yale, the Fraser River features a perilous series of rapids Simon Fraser once described as a place “where no human being should ever venture.”[8] Though Fraser, the explorer after which the mighty river is named, wasn’t a fan – the river that flows through the now popular Hell’s Gate tourist attraction was once a bountiful fishing place for the Nlaka'pamux people – far from “Hell”.[9] During the construction of the Canadian Pacific Railway in 1913, an explosive blast led to a colossal landslide, blocking fish passage north at the already narrow section of Hell’s Gate. It wasn’t until the second World War that the government was pressured to build a fish way that would allow salmon to fight their way upstream to spawn beyond the forever altered gorge.[10] 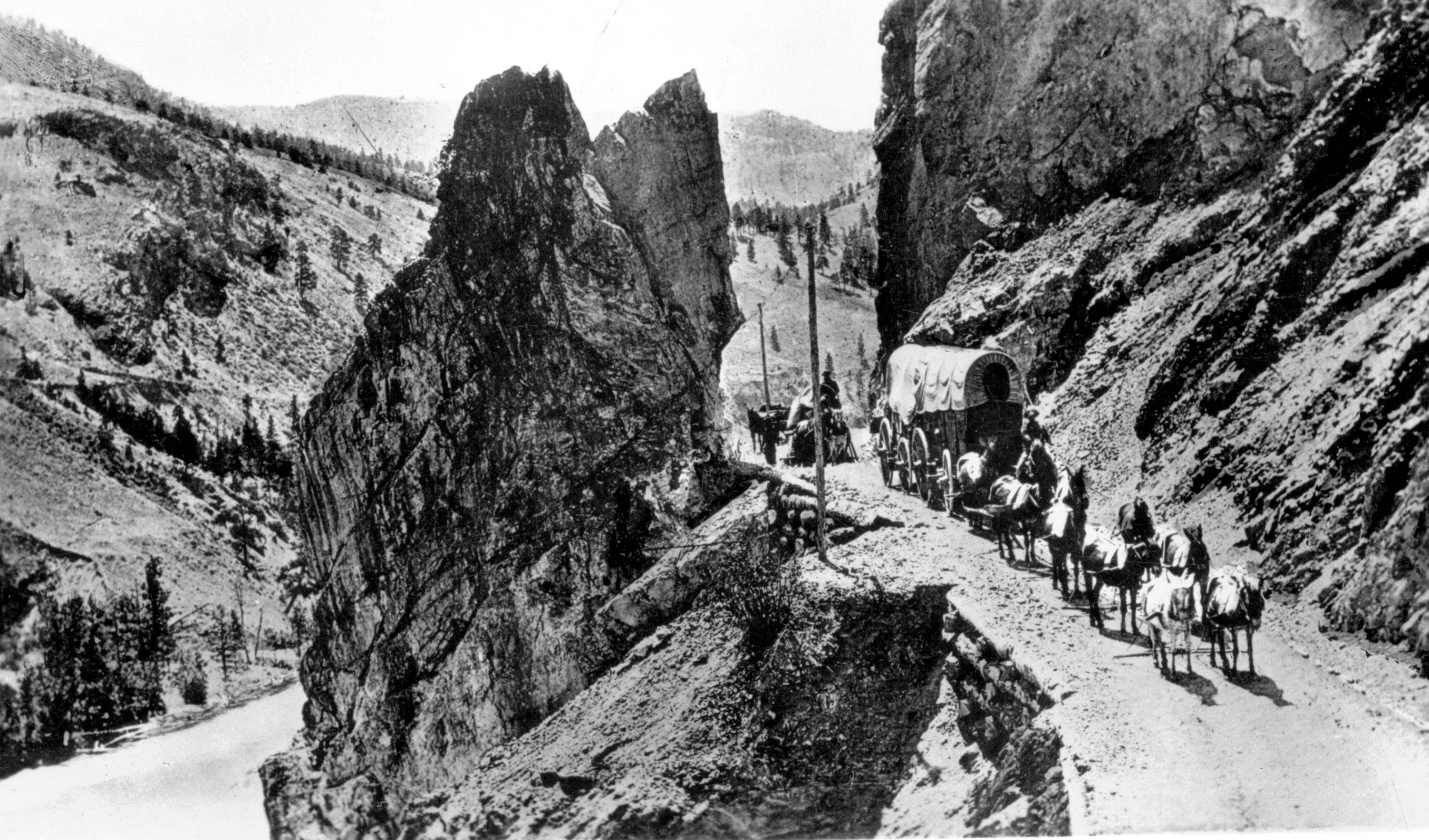 Image: Construction of The Cariboo Road along the Fraser Canyon

The Heart of the Fraser

Almost as if a direct response to the powerful waters of the Fraser Canyon, the river downstream of Yale widens and slows and the landscape changes once again. Past the confluence of the Coquihalla in Hope is a stretch of the Fraser River fondly referred to as The Heart of the Fraser. It is here that the river fans out, shallow and sinuous as it navigates the sand bars and levees of the flood plain. These calmer waters flow into side channels and provide crucial spawning, rearing and migratory locations for countless fish. Agricultural lands lie alongside this lush floodplain and farmers take advantage of the rich sediment deposited by the river. Since colonization, this area has been a contentious section of river as is often the way in the ongoing tug-of-war between the interests of the agricultural sector, commercial fisheries and natural worlds.

As the Fraser weaves towards the Pacific, it is joined by the Harrison, Nicoman Slough, Chilliwack, and Pitt Rivers. If not for the dikes built by settlers in the early 20th century, much of the lower mainland, largely what we consider the Fraser Valley, would be part of the alluvial fan at the estuary of the Fraser River, in other words – underwater. In fact, that’s what happened in 1948. The catastrophic flood that hit the Fraser Valley in spring of 1948 was unlike anything the settlers of the region had ever seen before. The dikes around Abbotsford, Chilliwack, and Mission broke and hundreds of homes were destroyed, along with 22 million hectares of farmland.[11] Dikes had disconnected 70% of the floodplain from the river, leaving little room for excess spring melt.[12] Indigenous people of the area accurately called these floodplain areas the “between lands,” referring to the constant flux of the state of the land between seasonal flows.[13] Today these river islands are home to entire cities (Richmond), massive industry like the waste-treatment plant at Iona and the airport, and agriculture.

Flowing beyond the brown-grey world of smoke-stacks and log-booms and landing strips, the Fraser reaches its final destination – free at last in the Georgia Strait. From a dripping mountain spring all the way to the great Pacific Ocean, the Fraser River touches most of our lives here in BC in some form. We hope you’ll join us in celebration of the Mighty Fraser Rivershed and all that it provides this BC Rivers Day. 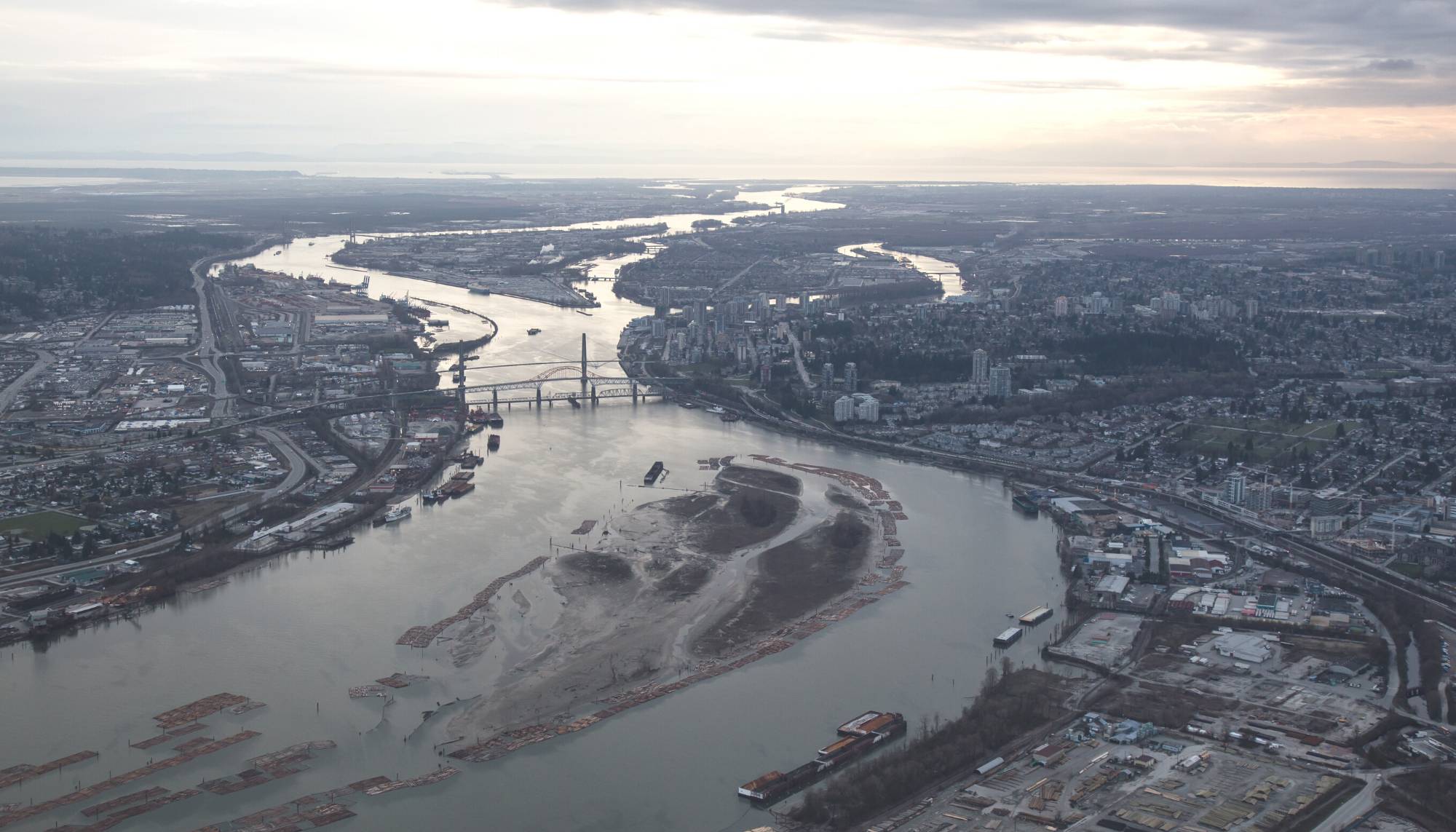