Fraser River Cleanup may be the largest event of its kind in B.C.

Organizers of the Fraser River Cleanup may be able to lay claim to hosting the largest river cleanup in B.C.

They are hoping to surpass last year’s record of 700 volunteers as they get ready to hit the riverbanks in Chilliwack on March 28 for the 13th Annual Fraser River Cleanup.

If signup numbers are accurate, they could see anywhere from 800 to 1,000 people fanning out on the gravel bar this year, which would again be an unprecedented and record-breaking turnout.

“The community and regional support this event has received over the years is nothing short of amazing,” said event organizer Kevin Raffle of Woodtone.

More than 130 tonnes of garbage has been hauled away since they started the cleanup.

“It is a prime example of people from all walks of life coming together to make a difference and raise awareness about the abuse that is happening along the Fraser River watershed,” Raffle noted.

The local cleanup could very well be morphing into the biggest in B.C. or even Canada, the organizer underlined, since they’ve been able to find evidence of another one that rivals the sheer scale and number of volunteers this river cleanup attracts.

The first Fraser-focused cleanup was in 2007, when a small group of passionate volunteers from Woodtone and Fraser Riverkeeper who cared deeply about the wildlife and Fraser salmon who depend on the river put it together and invited the public to join them.

“We started with 25 people, and the first cleanup was a company-driven event where we brought out a barbecue and had lunch afterward,” Raffle remembered. “It’s really grown as the awareness increased of what was happening outside everyone’s back door in terms of garbage-dumping. The growth is a testament to our community.” 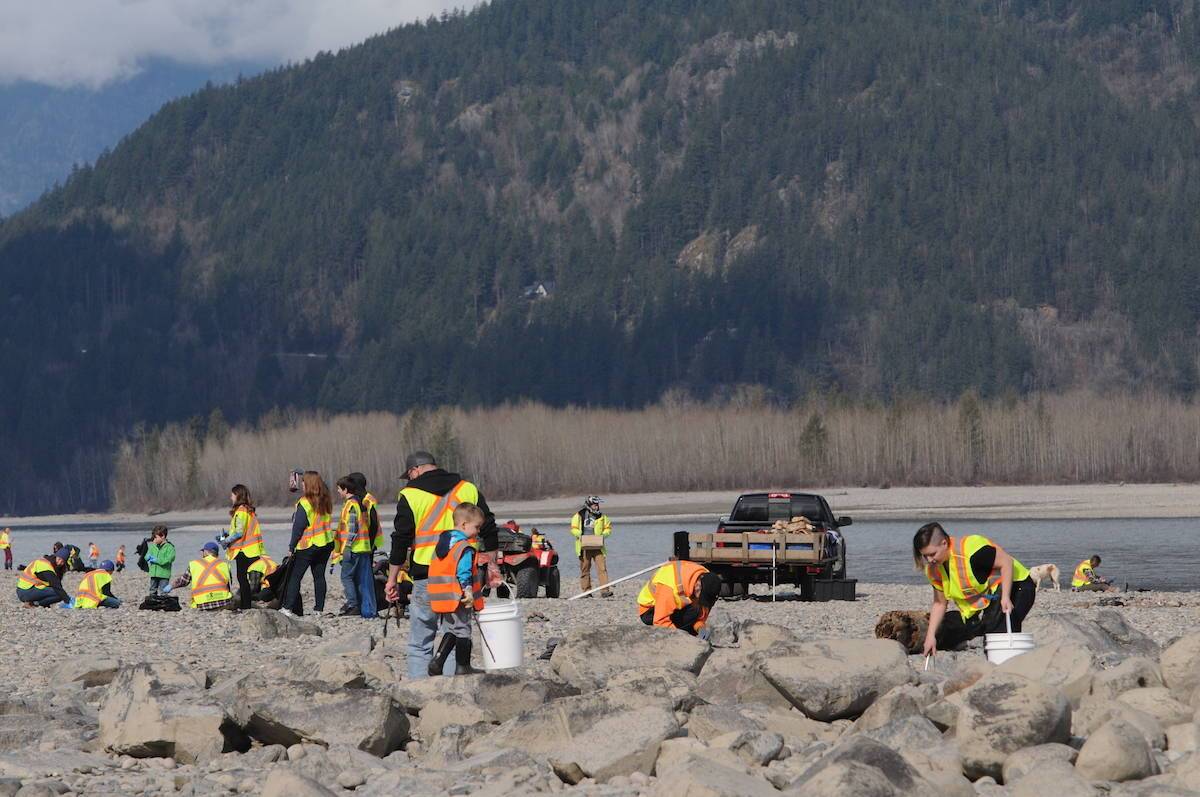 The March timing of the cleanup is no accident as it helps prevent trash from being washed downstream with arrival of spring “freshet” on the mighty Fraser.

Raffle said they were originally inspired by the ground-breaking stewardship efforts of the Chilliwack Vedder River Cleanup Society. It attracts hundreds of people to the south side of Chilliwack for a river cleanup twice a year, and the next one is April 4.

The groups have since joined forces, and collaborated on broader efforts with the creation of the Fraser Valley Illegal Dumping Alliance.

And Raffle is predicting the 2020 Fraser River cleanup will again be a success no matter what — even if they don’t break their record turnout from 2019.

“Our main focus is educating the general public about how fortunate we are to have these green spaces and access to waterways, and the need to protect them from environmental damage,” Raffle said.

After a morning of combing the river banks, Fraser Riverkeeper and Woodtone reps will celebrate the hard work of the volunteers with an annual volunteer appreciation BBQ hosted by Restaurant 62, followed by a prize draw.

“This is an incredible event that builds community through stewardship,” said Sadie Caron, program manager with Fraser Riverkeeper, an initiative of Swim Drink Fish. “They do a great job of cleaning up where everyone recreates.”

Volunteers will be meeting at the end of Gill Road, outfitted with gloves, buckets, garbage-pickers, and high-vis yellow vests.

Volunteers are asked to remember to dress in warm layers, with sturdy boots, and to bring a reusable beverage container to the event.