WE DID IT! On Saturday August 16th, 2014 I successfully swam from Schooner Cove (on Vancouver Island) to Reception Point (near Sechelt) in 11:55.47. Wow, what an incredible day.

But it wasn't only an incredible day, it was an incredible year. The journey that has brought me here has been an experience in itself and I will be forever grateful for all the people and adventures I met along the way.

My team and I were set to swim on August 3rd with our boat ready, food prepared, and smiles on from ear to ear. Unfortunately we faced strong wind advisories on both August 3rd and 4th which made the conditions unsafe to swim. It was an extremely frustrating few days. 10 months of training and organizing the swim and we couldn’t event start. I was devastated. But I knew that this adventure wasn’t over. I spoke with my boat captain and he was just as dedicated to the swim as I was so we decided that the team would be “on-call” from August 11th- 22nd waiting for the weather to change and conditions to be favourable for the swim.

These two weeks on-call were a true mental challenge and one of the toughest parts of training for this swim. 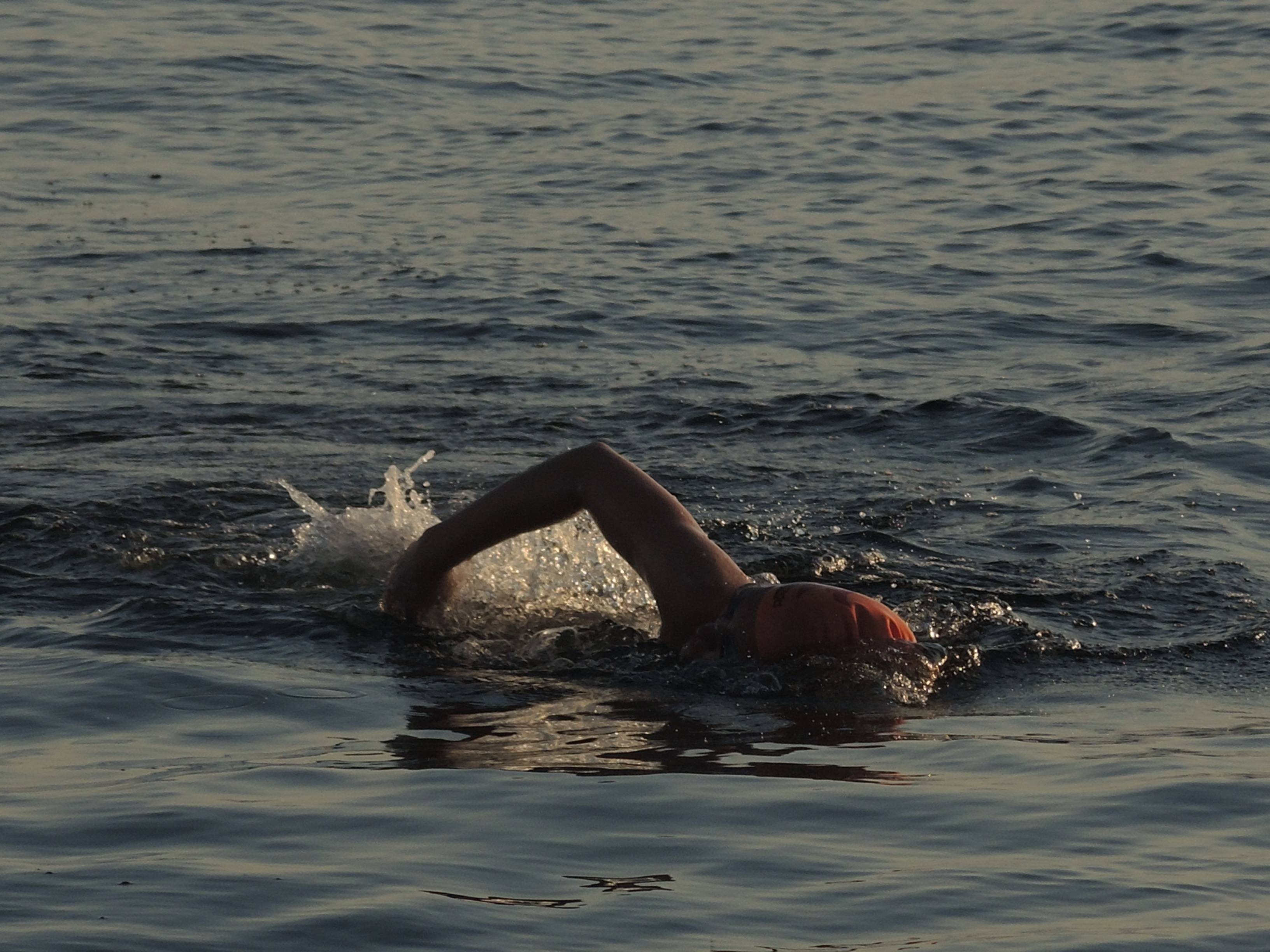 The team was called by boat captain John Dafoe on Thursday, August 14th late in the afternoon with the news that conditions on Saturday, August 16th looked favourable. We quickly made moves to ensure we would be ready to go. Energy balls had to be made, hotels booked, flights to catch and ferries to organize. The team arrived in Sechelt late Friday night excited for what the next day might bring!

The team received a wake-up call at 5:00am and we headed down to the dock ready to get on the boat by 6:00am. We started the day with grey skies and a bit of rain but that didn’t get us down! 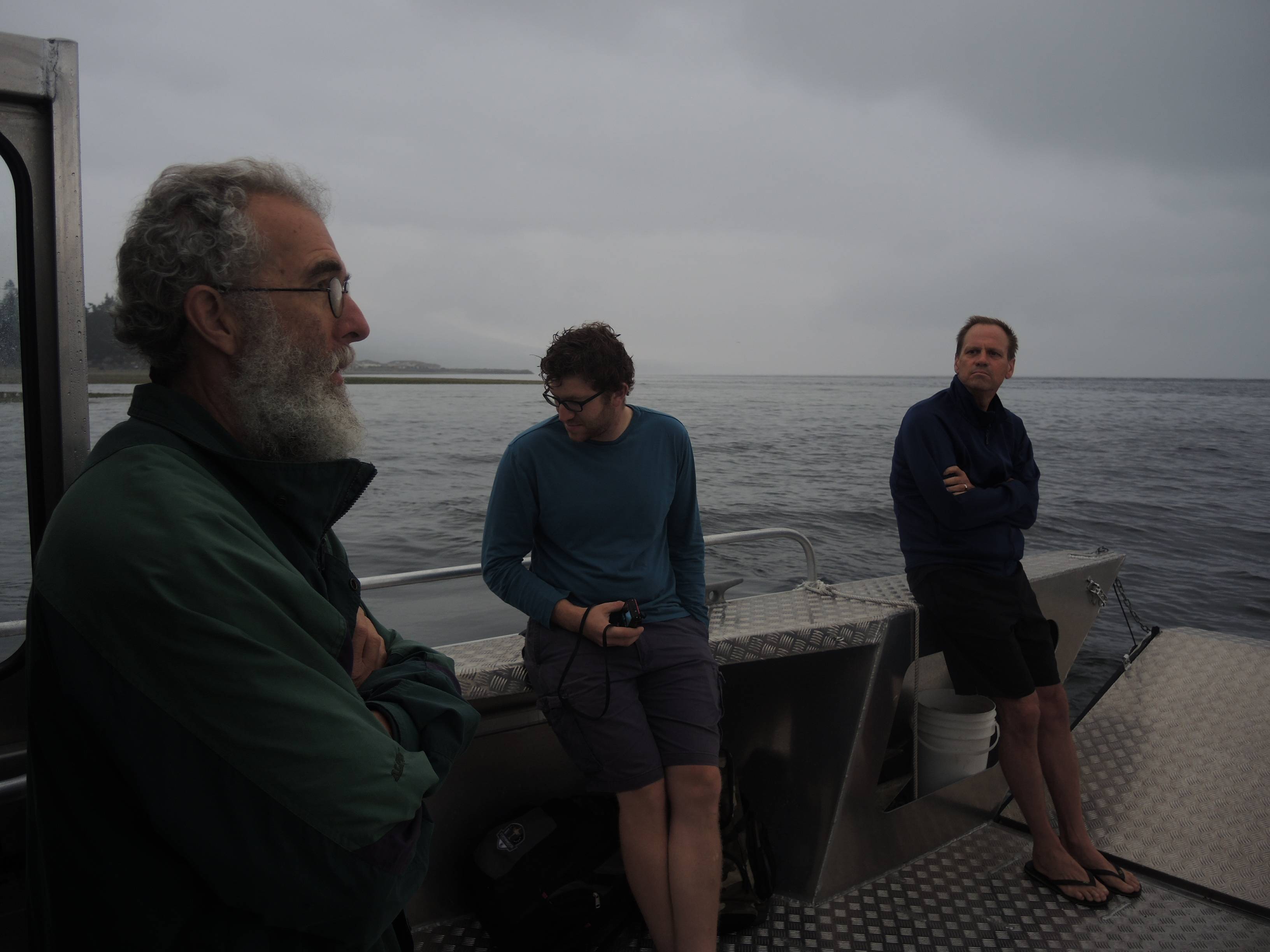 We had planned for a Sechelt start but when we got out on the water and looked at the forecasted conditions we quickly decided that we better cross the strait and prepare for a start on the island side. It was tough being in the boat quickly motoring across the water that I would soon be swimming in. The team tried to keep me occupied and smiling as they knew we had a long day ahead. We landed at Schooner Cove (just North of Lantzville) a little before 8:00am. I covered myself in sunscreen and “goop” (a mix of lanolin and Vaseline), put on my cap and goggles and hopped off the boat at 8:03am! You can see a short video of the start here.

Overall the swim was pretty smooth. I had asked the crew at the start of the swim not to talk to me about distance, time or temperature so I had very little knowledge of where we were throughout the swim. As we continued through the day the skies cleared and I got to enjoy the warmth of the sun on my back for the majority of the swim.

I don’t really remember much until I reached the 7.5 hour mark. This is where I hit my first wall. My shoulders were aching, my tongue and lips were all shriveled from the salt, and food and water no longer tasted good. I was forcing food down just so I had the energy to keep going. At this point I could see Sechelt in the distance, which was the toughest part. 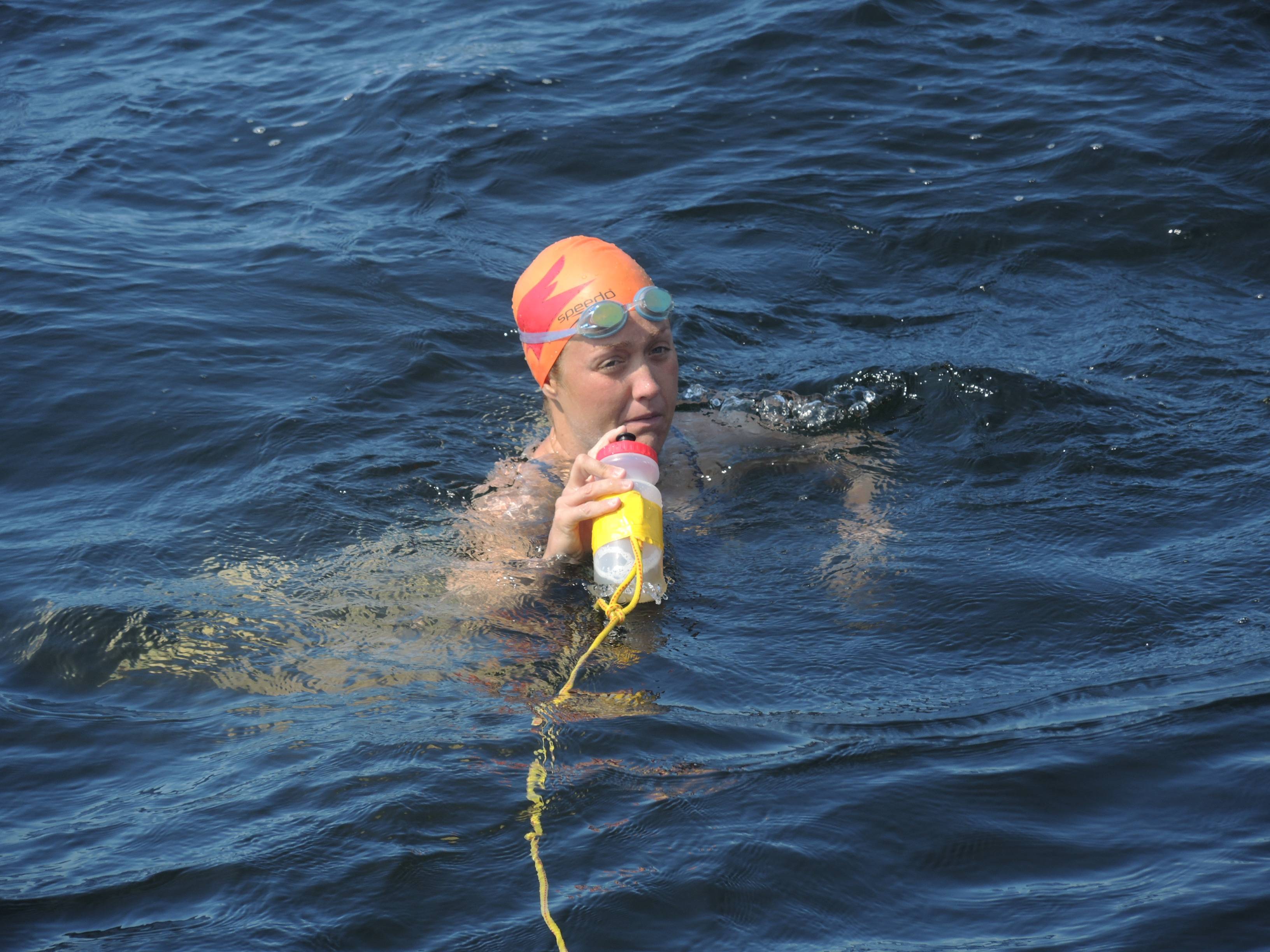 I broke down and finally asked my crew how much time we had left in the swim. My estimate was somewhere between 3-4 hours. They all put their heads down and were ignoring my statement until James said it looked like it would still be over 5 hours until the finish. That is NOT what I wanted to hear. I didn’t take much food that break and I just kept swimming while I was fighting back tears. (NOTE: Only after I finished the swim did I hear from the crew that during this part of the swim we had been stuck in a current that had us basically swimming in the same spot for about 2.5 hours! Every time we stopped for food we actually moved backwards. Yikes!)

After a 30min angry swim I saw the bright yellow sign on the boat that indicated it was time for feeding #16. When I got close to the boat James told me that we were just 10km from shore (we had finally broke through that current!). 10km! That’s awesome. 1 Bay Challenge left. I have swam 10km countless times in the past year and I knew we were around 3.5 hours from shore (if conditions stayed in our favour). Rod jumped in the water with me for the next hour to keep my brain occupied and energy levels up as we swam for shore (NOTE: Rod is a champ. He swam with me every other hour throughout the swim after the first two hours. He really kept me going!).

The next 3 hours were intense. I was in a lot of pain but when you’re that close to shore giving up just isn’t an option. At this point my only request was S’mores, a couch and a T.V waiting for me at the finish.  Since I decided to do the swim without a wetsuit Hypothermia had been my biggest fear through training and I was always dreaming about hot tubs. Fortunately with this amazing Vancouver summer I never faced temperatures below 18 degrees Celsius so the couch was outweighing the need for a hot tub!

I took my last break for food and water when I was just 900m from shore. That 900m swim was the longest 900m in the world! It was such an incredible feeling to touch shore and such a challenge to actually stand up and clear the water line! I will remember this day for the rest of my life. 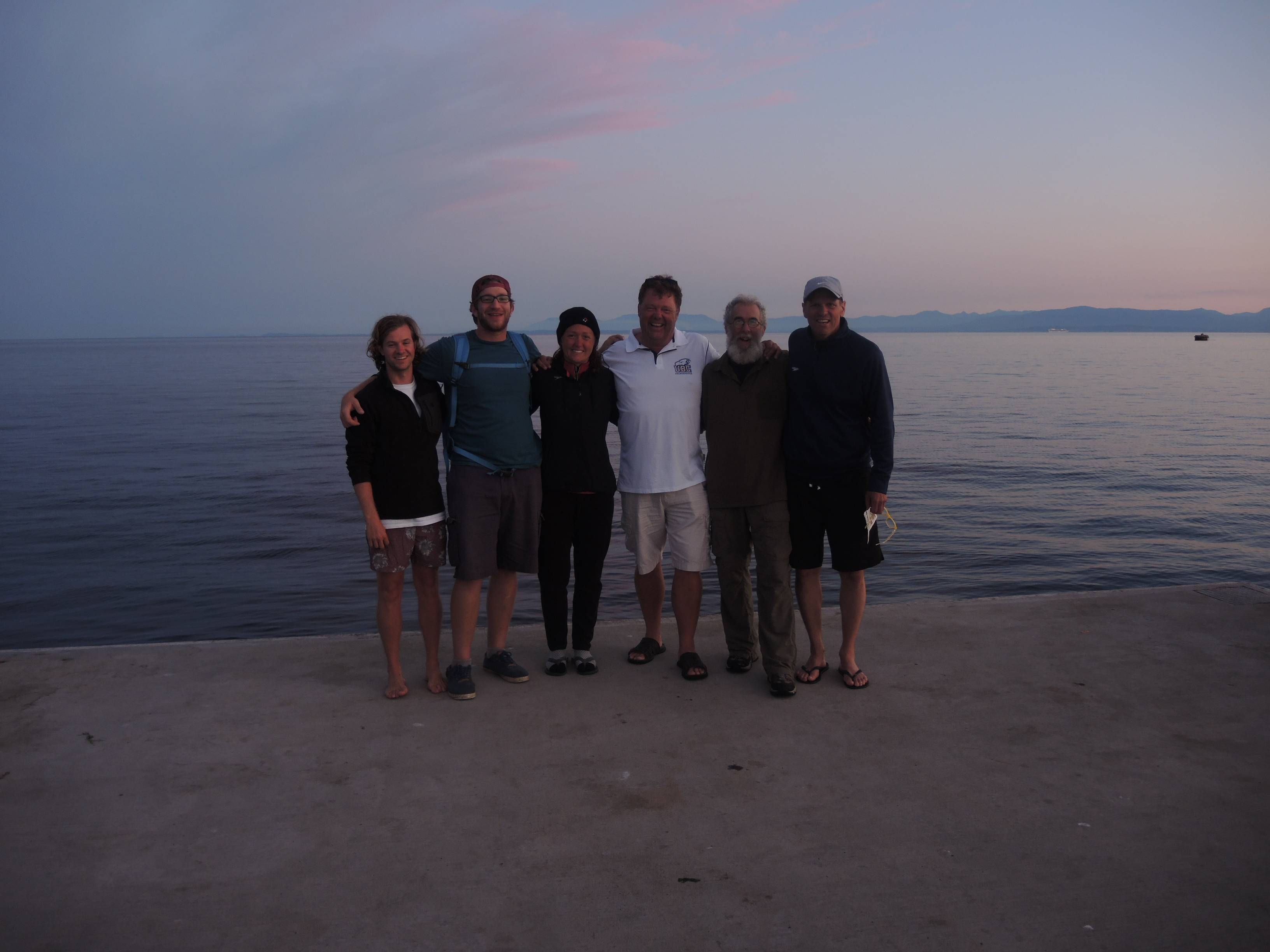 Of course this amazing swim would not have been possible without my tremendous team. My boat captain John Dafoe, training partner Rod Craig, food and happiness extraordinaire James Higgins, and encouragement from my amazing Dad, Bob Schoeler (see his live Twitter feed here), and best friend Toga D’hoore pulled me through the tough hours. And even though he was unable to be on the boat for this second attempt, my extremely knowledgeable and talented coach, Peter Scott, was with me the whole way with tips and tricks rolling through my head.

I would also love to extend a huge thanks to you! As you know, this swim was also an opportunity to raise awareness about water quality issues in the lower mainland. While I had the chance to enjoy the clear, salty waters of the Georgia Strait, the Vancouver area is facing some different conditions at their local beaches. Unfortunately we currently have 3 beaches closed and 5 beaches on the verge of being closed in the Vancouver area. This is devastating. For my last two weeks of training my coach actually advised me to do most of my training in the pool because water quality around the city was so bad. This is exactly what I feared would happen and is the reason I did this swim. 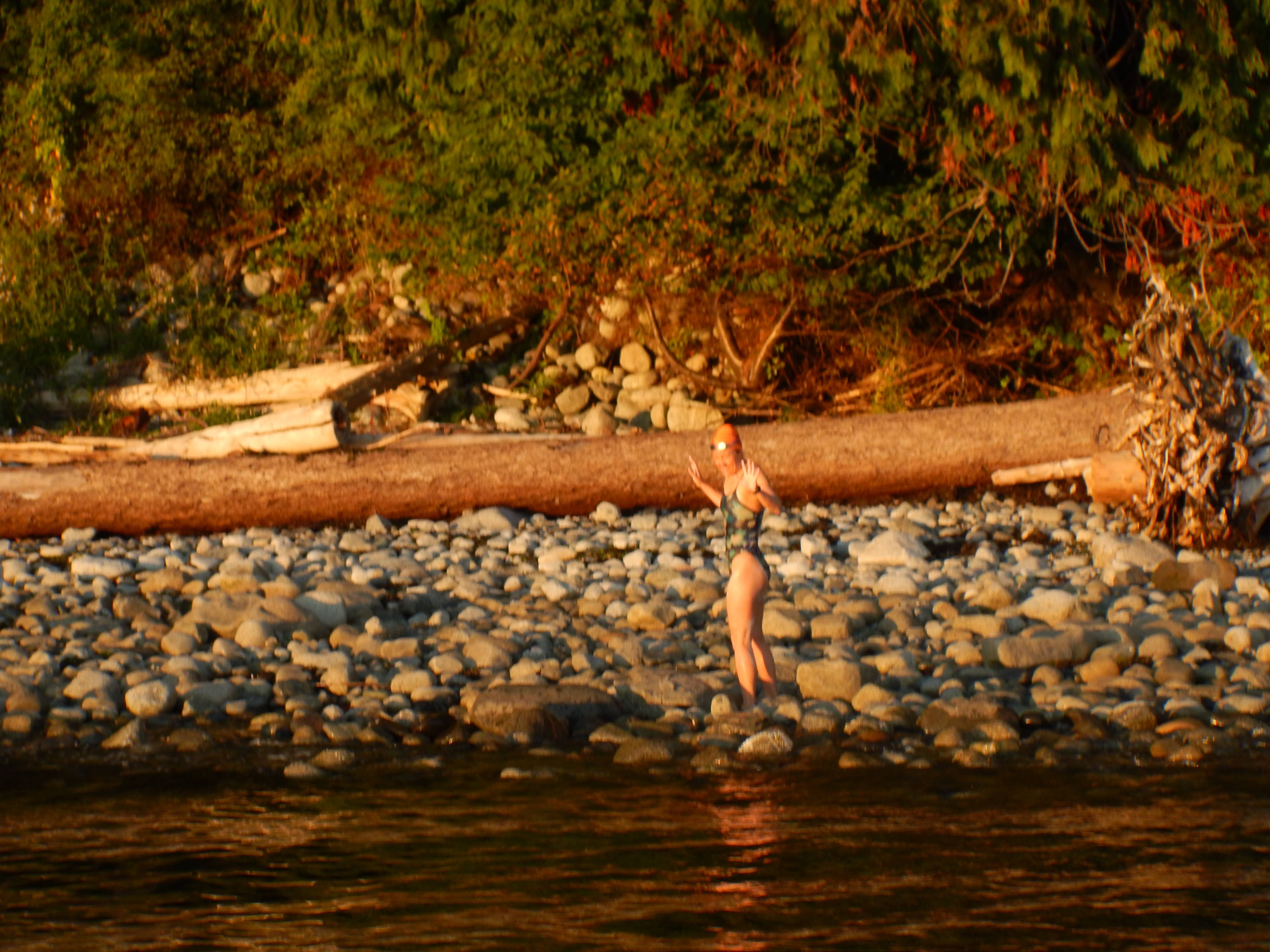 With your help we have raised nearly $18,000 that will allow Fraser Riverkeeper to continue the Shore Patrol Program and other clean-water campaigns in the lower mainland. I am so excited to keep you updated on how your gift is helping us move towards a more swimmable future.

I would like to leave you with some final words from my boat captain, John Dafoe: “The sea demands respect, is uncompromising and of course is a vast integrated system. We need to integrate ourselves into it, know it, protect and conserve it. Thank you for “River keeping” and a bright and positive outlook.”

Please use this journey as a reminder that anything is possible if you put your mind to it.