CHILLIWACK — They came from all over the Lower Mainland, with little in common but a love for the river.

More than 700 people attended the annual Fraser River Cleanup here Saturday, adding to the more than 125 tonnes of garbage collected from the riverbank during the past 12 years. 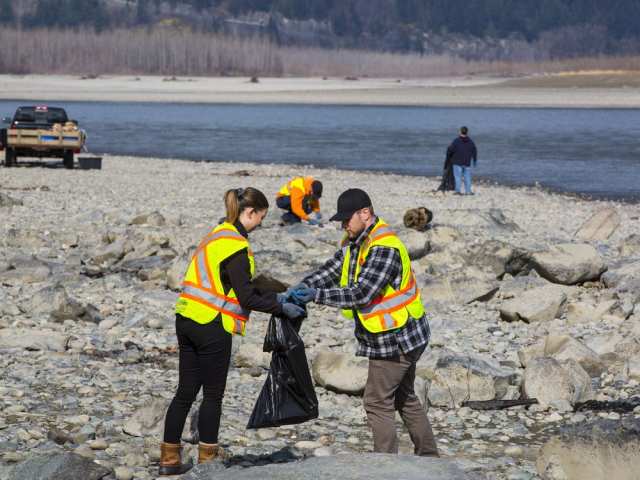 The 12th annual Fraser River Cleanup volunteers cleaning up trash on the banks of the Fraser River on Saturday. (FRANCIS GEORGIAN)

Environmentalists joined families, fishermen and weekend warriors on ATVs, fanning out across the gravel bars to collect trash, including construction materials, mattresses, metal and buckets of nails.

Denise de Ste Croix of North Delta made the trek to enjoy the sun and “impart a sense of social responsibility” to her two kids, seven-year-old Alexis and two-year-old Jackson.

“It’s not our stomping ground, but we’re out in nature a lot, so we wanted to find a way to give back,” she said. 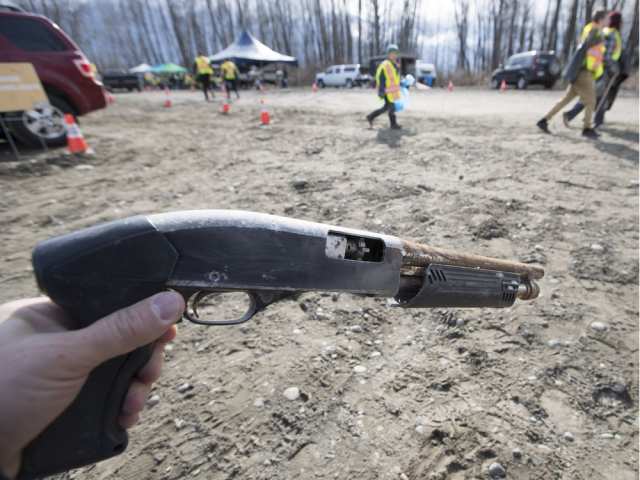 A short-barrel 12-gauge shotgun was one of the stranger items found during Saturday’s shore cleanup. (FRANCIS GEORGIAN)

A few metres away, at the edge of the smooth grey river, Chilliwack locals Gina Ripley and her three children — 12-year-old twins Anthony and Thomas and 11-year-old Shaye — were using a magnet to collect rusty nails left over from pallets burned in weekend bonfires.

“I think most people who come down here are pretty good about taking their garbage with them, but they don’t think about the nails,” she said.

Fourteen-year-old Doris Liu joined her mother and three siblings in the spring sunshine. The family lives in Vancouver but often fishes the Fraser, she said.

University of B.C. forestry student Kelli Stenson and friend Julia Pepler were thoughtful about their reasons for joining the cleanup.

“Events like this are really important to allow people to see the issues,” said Pepler.

Stenson agreed that when people have access to natural places they begin to care for them.

“If people are disconnected from these areas, they’re more likely to mistreat them,” she said when asked if closing off areas to recreation would help preserve them.

The cleanup event is organized by Fraser Riverkeeper with help from several different environmental groups and corporate sponsors. The City of Chilliwack offsets some of the disposal costs. 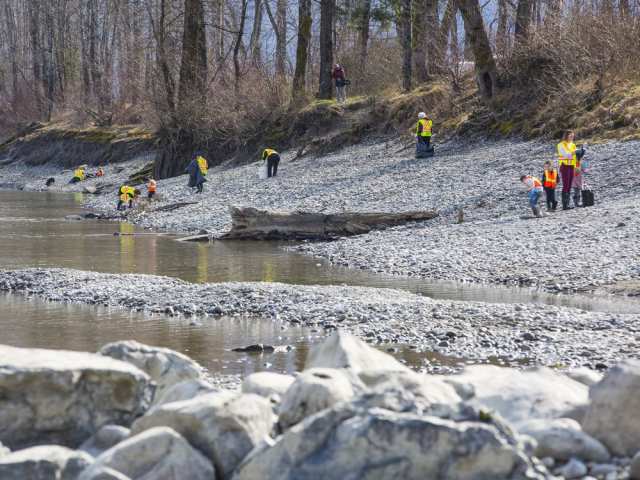 The number of volunteers at the annual Fraser River Cleanup continues to go up every year. (FRANCIS GEORGIAN)

Fraser Riverkeeper program manager Molly O’Ray said illegal dumping is an ongoing problem, but the organization is encouraged by events like the river cleanup as the number of volunteers keeps increasing each year.

“That tells me the culture is slowly shifting, that people are connecting with these places and want to help preserve them,” she said.

B.C. conservation officer Alicia Stark told Postmedia News dumping continues to be a problem in B.C.’s Lower Mainland. The Conservation Officer Service has four officers in the Fraser Valley South region, which stretches from Boston Bar to Richmond. Two additional officers have been hired and should complete their training by the end of the year.

“We rely on people’s reports as well as our own patrols (to prevent illegal dumping), but we can’t be everywhere,” she said. “If someone is a witness, or they find something that’s been dumped, we need them to report it.”

Conservation officers can issue $115 tickets or bring charges under the Environmental Management Act.

Reports can be made to the provincial RAPP hotline (Report All Poachers and Polluters) at 1-877-952-RAPP or by completing an online form.