Officials dream up new ways to track down people who sully rivers, forests

The spring melt in B.C. uncovers crocuses — and garbage, by the truckload in some spots.

Illegal trash dumping costs millions of dollars provincewide and it has groups calling for everything from stiffer fines to more surreptitious monitoring. 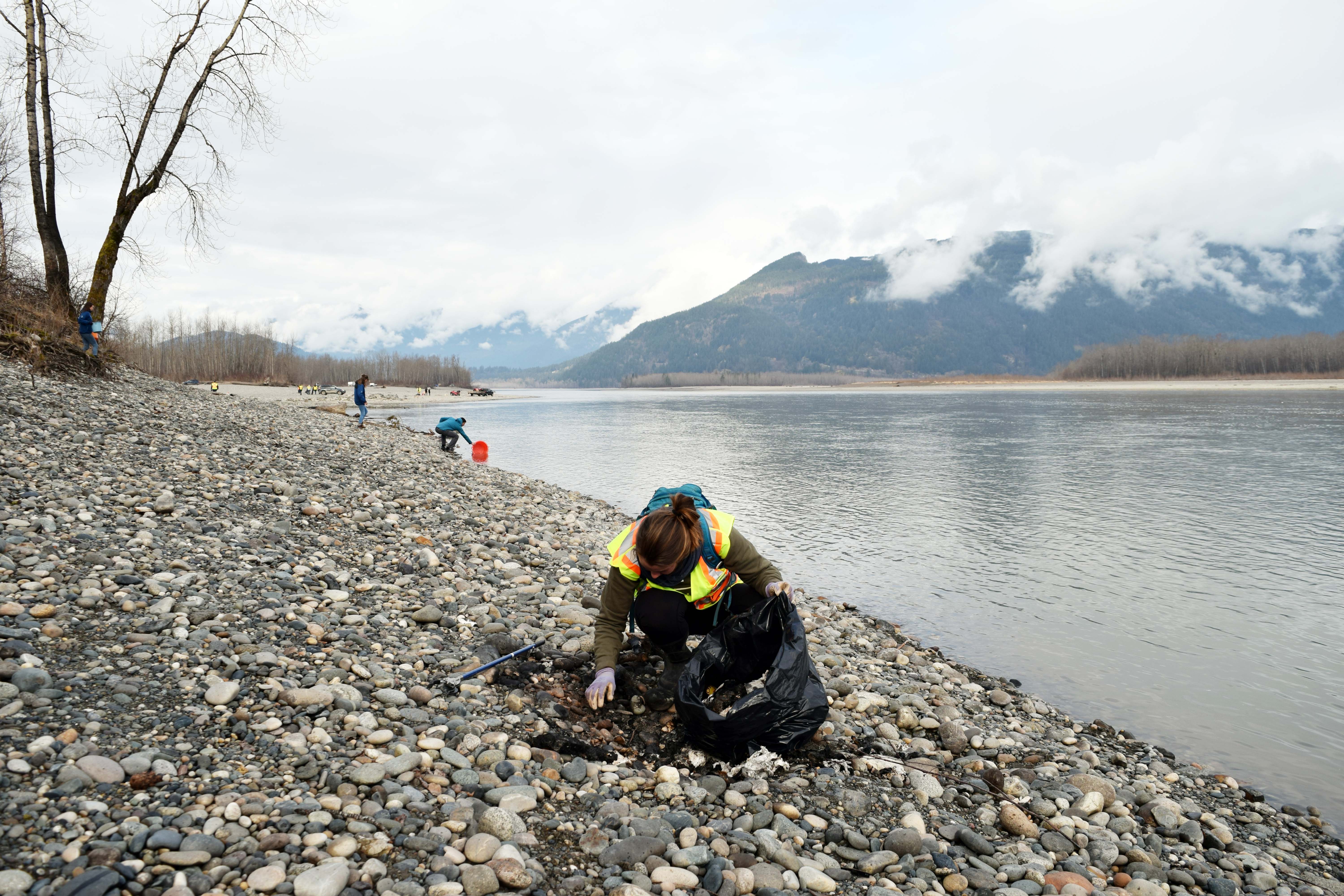 More than 700 volunteers turn out to clean up the banks of the Fraser River near Chilliwack every year. They pick up all manner of surprises from discarded fridges to tossed weapons. (Fraser Riverkeeper)

"Maybe one day we will have drones going over areas where there's frequent dumping," said Harvinder Aujala of the Recycling Council of B.C. — who only half-laughs at the idea of posting offenders caught online.

The odd bag of garbage that drivers see strewn on highways is only the tip of the tipping iceberg, she says.

"It is such a beautiful place and it's kind of like a few people are ruining it."

Vancouver received more than 22,000 illegal dumping reports and spent more than $2.1-million in cleanup cost in 2018. That's despite a bylaw that allows tickets of up to $500 and the option to prosecute and fine up to $10,000 in extreme cases. 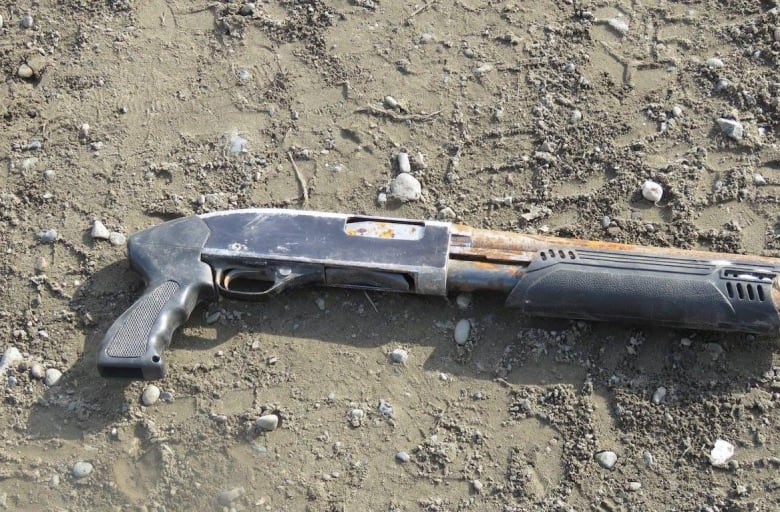 Where do you toss out a sawed-off shotgun? Along the Fraser River apparently. That's where volunteers hauling out trash during the March school break found the discarded gun. (Chris Gadsden )

Not above 'scare tactics' to stop it

The issue goes far beyond abandoned couches in urban back alleys. Waste ranges from abandoned homeless camps to truckloads of drywall all over the province.

"It's persistent, frustrating and it makes no sense why people need to dump their garbage in the forest [to save] a few dollars," says Conservation Officer Scott Norris. 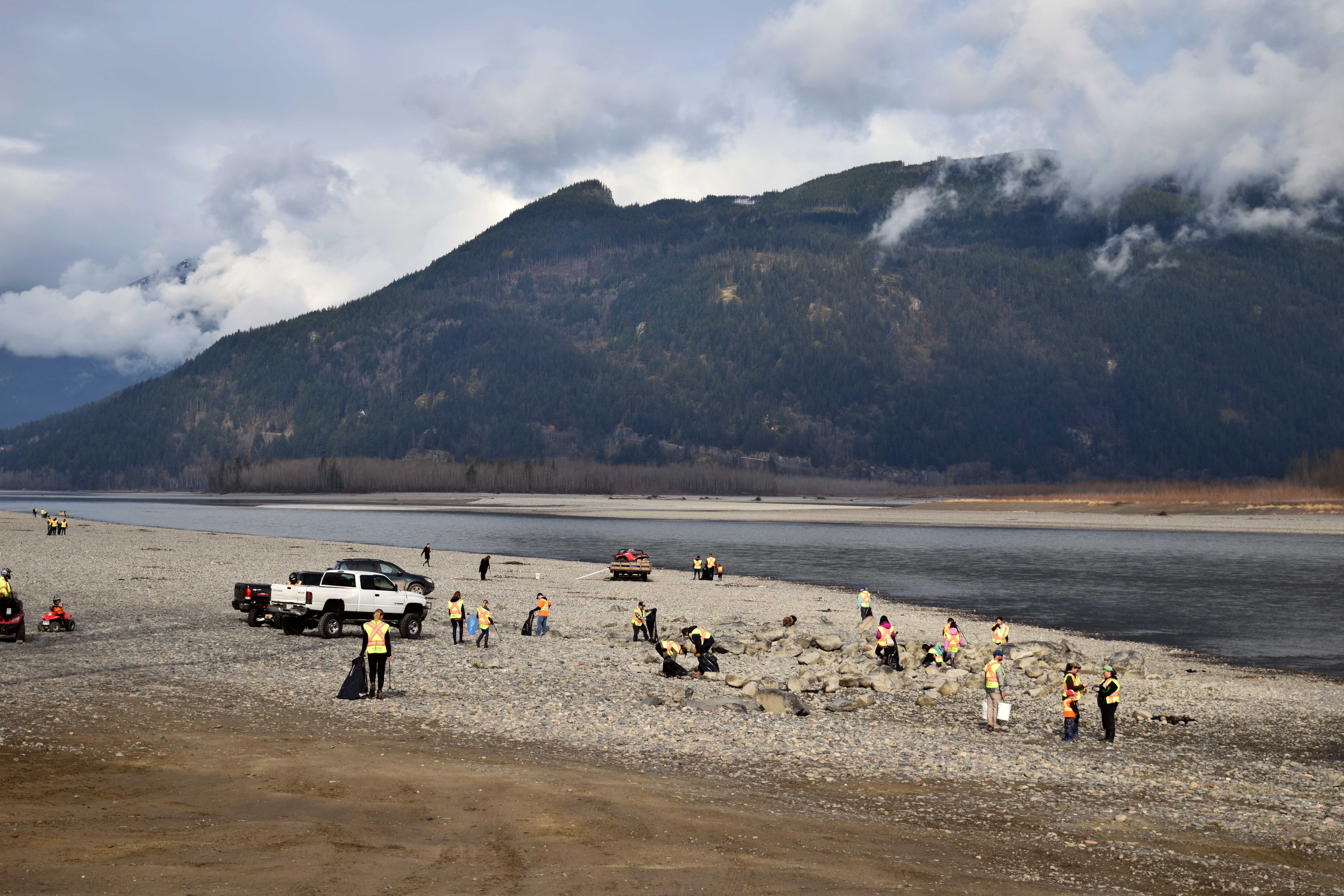 Volunteers flock to the shores of the Fraser River earlier this month for the 12th annual shore clean up. Over the years they've removed 130 tonnes of trash around Gill Bar, a popular recreational spot near Chilliwack B.C.(Fraser Riverkeeper)

And Norris says that many of the spots where people dump are so remote that the cost of gas to get there is higher than any tipping fee.

He admits that hidden cameras are a tool used to catch tippers, but it's challenging.

"It's something we've discussed at length — that preventative kind of scare tactic does serve a purpose," said Molly O'Ray, a Fraser Riverkeeper.

This year a sawed-off shotgun turned up

But O'Ray says outreach is also effective. She credits an aggressive educational campaign by the City of Chilliwack for halving the haul of garbage at the 12th annual Fraser River Cleanup over spring break to only 6.5-tonnes this year. This year volunteers hauled 6.5 tonnes of garbage away from the banks of the Fraser River in their annual spring cleanup of a popular recreational area near Chilliwack. (Fraser Valley Illegal Dumping Alliance)

The 700 volunteers find fridges, mattress frames and this year, massive truck tires and a sawed-off shotgun.

A booming construction industry around the province is contributing to illegal dumping of building scrap which could be contaminated with asbestos if it's from pre-1990 buildings.

It cost about $200-per-metric tonne to dispose of contaminated drywall in Vancouver which must be specially bagged. 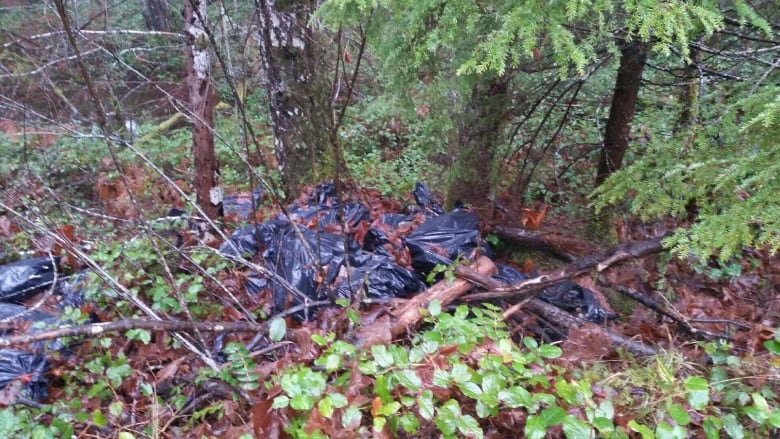 "It's pushing people to illegal dump. Somebody will go to do a kitchen reno now and find the tiles contain asbestos so they bag it up themselves and dump it in the bush," says Brad Jones who has run DBL Disposal Services with his brother since 1996 in Nanaimo on Vancouver Island.

Then there are long-standing refuse hotspots north of Nanaimo such as Little Mountain Road and Dumont Road which has been nicknamed 'The Wastelands,' due to all the junk left there, including the odd stolen car.

Jones has hauled out truckloads of fish guts and deer carcasses and even a three-tonne load of construction scrap secreted in the ferns near Nanaimo River Road last December.