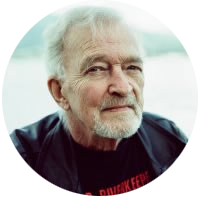 Mr. Chapman, FRK’s first Riverkeeper, was a revered prosecutor of polluters and in his lifetime one of Canada’s most significant environmental advocates. His successes included obtaining the first Canadian jail sentence for a polluter (George Crowe). In 1993 he commenced his association with the Sierra Legal Defence Fund (SLDF) working in Vancouver and in Toronto as an environmental investigator and private prosecutor. He directed the gathering of evidence and the preparation of prosecution briefs in 14 private environmental prosecutions in British Columbia and Ontario.

For over 40 years Mr. Chapman was the captain or navigator on sailing and motor vessels making passages across the Great Lakes, the Mosel, Rhine and Rhone rivers in Europe, the Caribbean and Mediterranean Seas and the Atlantic and Pacific Oceans. He also fished commercially on the British Columbia Pacific coast for four years as captain of a 37-foot wooden salmon troller.