Celebrate World Fisheries Day this year by reading about some of our favorite fish in the Fraser River basin!

World Fisheries Day is a day for celebrating fish and fishers, as well as a chance to consider the status of the oceans and communities that rely upon fisheries. This year, we’re learning about some of the lesser known or under appreciated fish in the Fraser River basin. Take a moment to check out these unique species!

Which fish is most likely to... 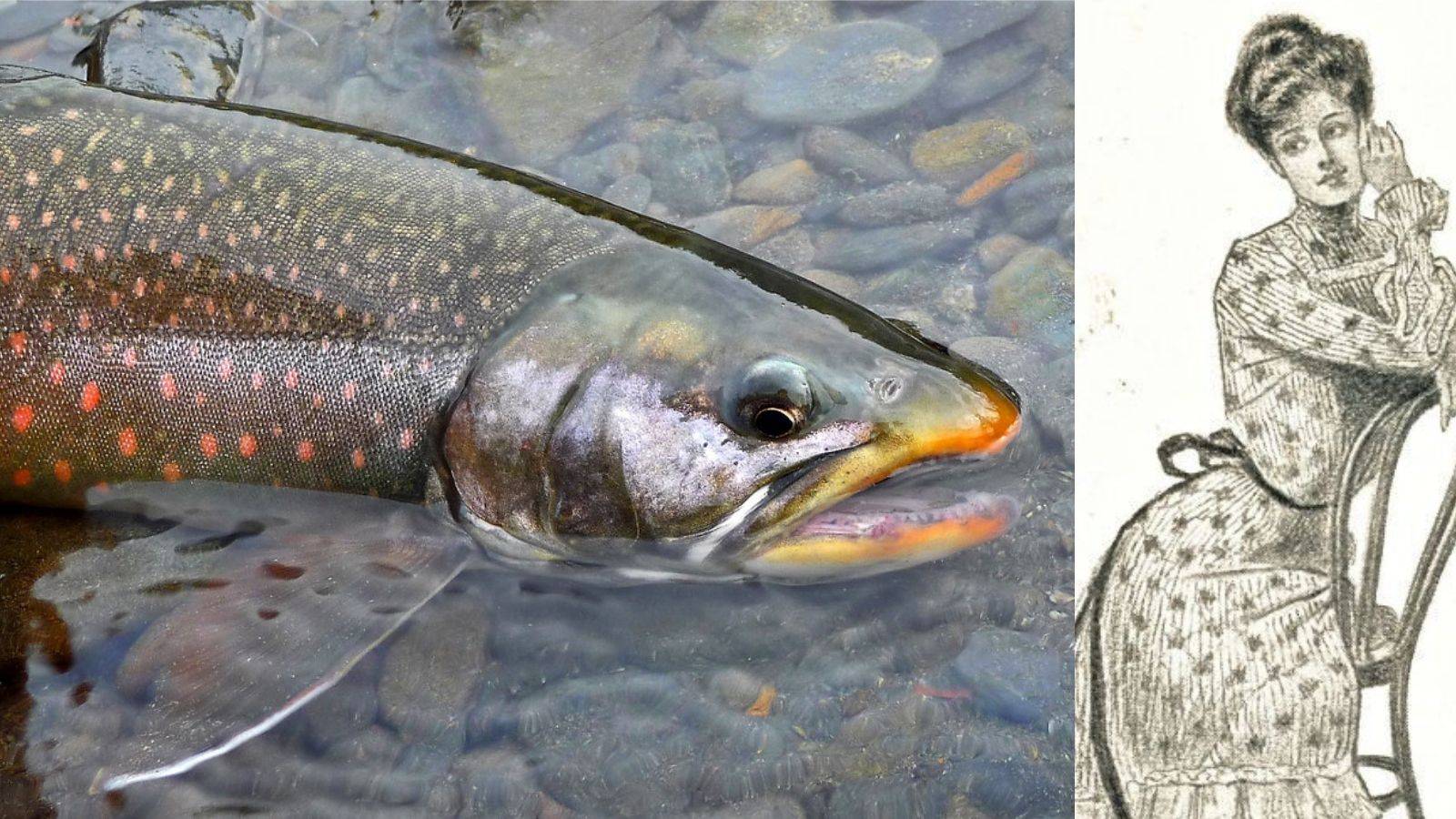 Now that’s a trout with a pout! The Dolly Varden is a beautiful species of Char (cold water salmonid) that lives in the colder reaches of the Fraser River watershed. Some of these beautiful, speckled fish are anadromous, which means they summer (how glamorous!) in estuaries of their home stream to spawn, but often grow and mature in the ocean. With a name like “Dolly Varden” you might expect some connection to the queen of country, Dolly Parton. But no! The fish gets its name from a style of dress popular in the 1870’s. Once upon a time, a young woman in California set eyes upon a lake trout, decided it looked just like the Dolly Varden dress she was wearing and said “why not call it a Dolly Varden?” And it was ever thus. See the resemblance? 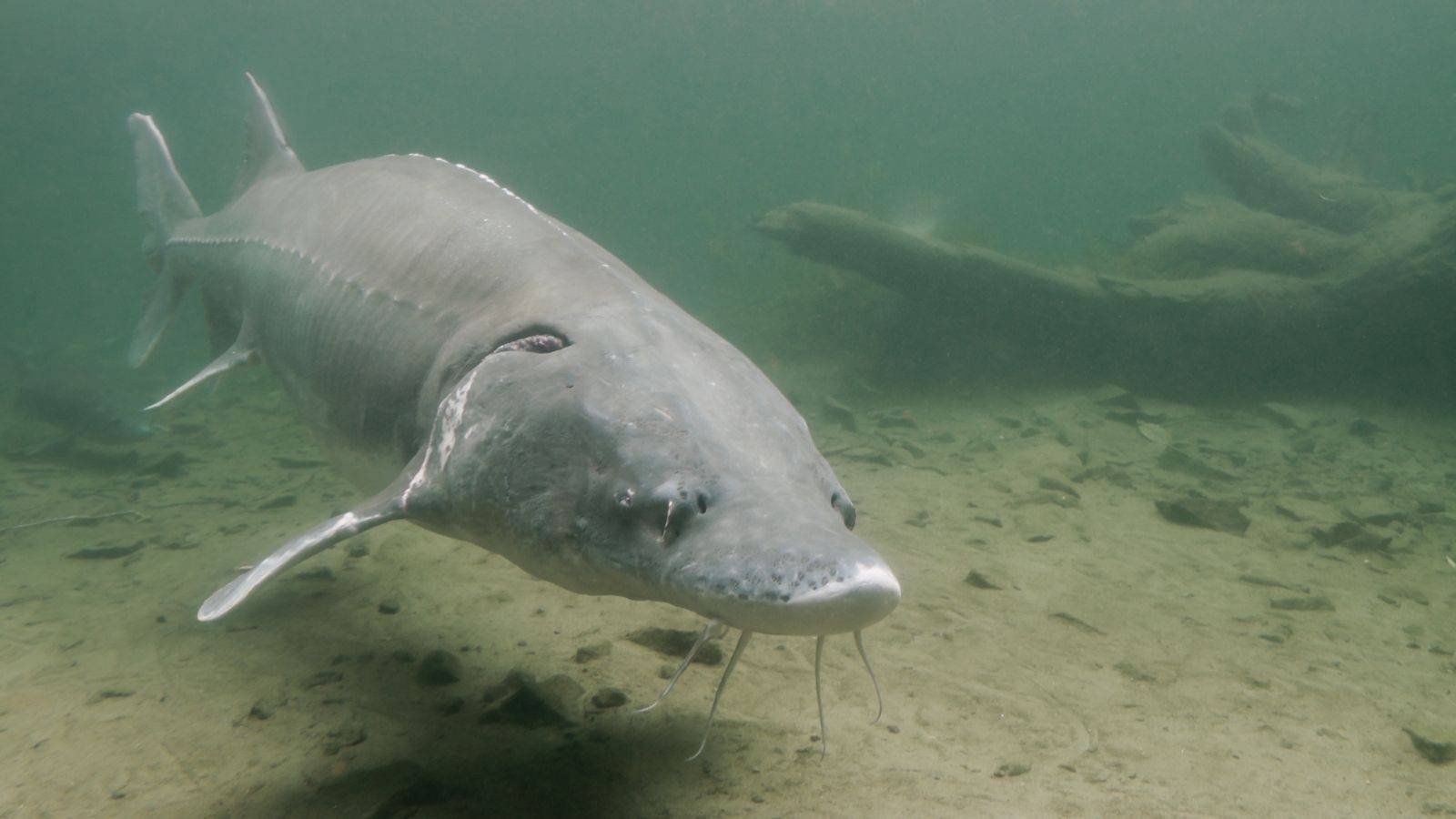 Never before has the phrase “older, better, stronger” been more true. North America’s largest freshwater fish, the white sturgeon, is arguably the Fraser River’s most magical inhabitant. These gentle giants are known to glide along the banks of the Lower Fraser, their bodies spanning the length of a small school bus. Surviving volcanic eruptions, major climatic shifts, and ice ages, the white sturgeon has remained largely unchanged as a species for about 175 million years. On average, they live to be 80 to well over 100 years old. The oldest sturgeon recorded was 152 years old. That fish must have some epic stories.

You’d think a massive, bony fish like this would be a major predator, but the sturgeon doesn’t even have any teeth. They are bottom feeders, and spend most of their time in deeper water, using their whiskers to smell whatever food they can suck up with their vacuum-like mouths. It is more likely that the sturgeon are the ones being preyed upon. White Sturgeon is ranked as a critically imperilled species by the British Columbia Conservation Data Centre and is classified as an endangered species. Over the past century, their West coast  populations have suffered from over-fishing, degradation of habitat (dams, dyking, expansion of infrastructure, poor water quality, and competition with humans for salmon and other food sources we share. A recent study by UNBC grad student, Cale Babey, revealed that river otters have been feasting upon juvenile white sturgeon in the Nechako River, making a decent dent in the already endangered population. Those ravenous little weasels!

If you get the chance to see a sturgeon in the flesh, take a moment to appreciate this majestic modern-day dinosaur. 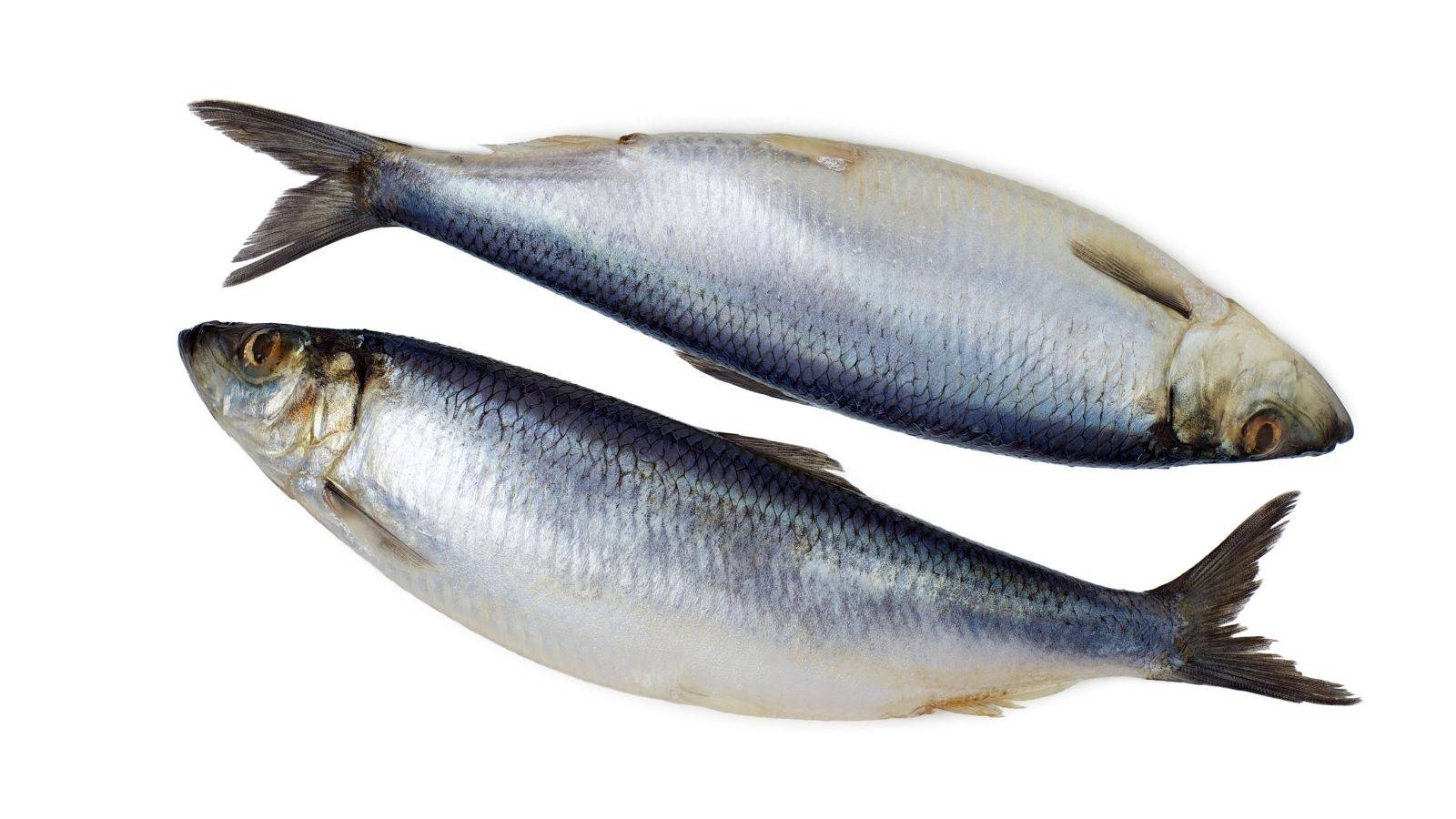 Pacific herring are really the unsung heroes of the Pacific Northwest. Not because they’re that interesting (sorry, herring), but because they form the foundation of the marine food chain. Apart from salmon, you would be hard pressed to find another species more culturally, economically, or ecologically significant as the herring. Unfortunately, pacific herring numbers have seen a decline in the past century. This silvery little fish has been heavily exploited over the years in the name of commercial fishing. This affects just about every other species along the British Columbian coast.

“This small silver fish plays a major role in the lives of nearly every coastal species on land or underwater in British Columbia.” - Pacific Wild Protect Pacific Herring Campaign

But even slight increases in herring numbers can reverberate throughout the food chain. Every spring, herring congregate in huge numbers to spawn along the coast. Females lay about 20,000 eggs each on seaweed, eelgrass, or rocks. These events attract wildlife from every link in the food chain. It’s quite the feast to behold.

The Squamish Streamkeepers have been covering toxic creosote pilings in False Creek with protective, textured material that allows female herring to successfully lay eggs. These conservation efforts have been successful in other areas of the Burrard Inlet. The hope is that a small population of herring will once again spawn in the waters of False Creek, and with that, bring life.

Be the black sheep of the family? 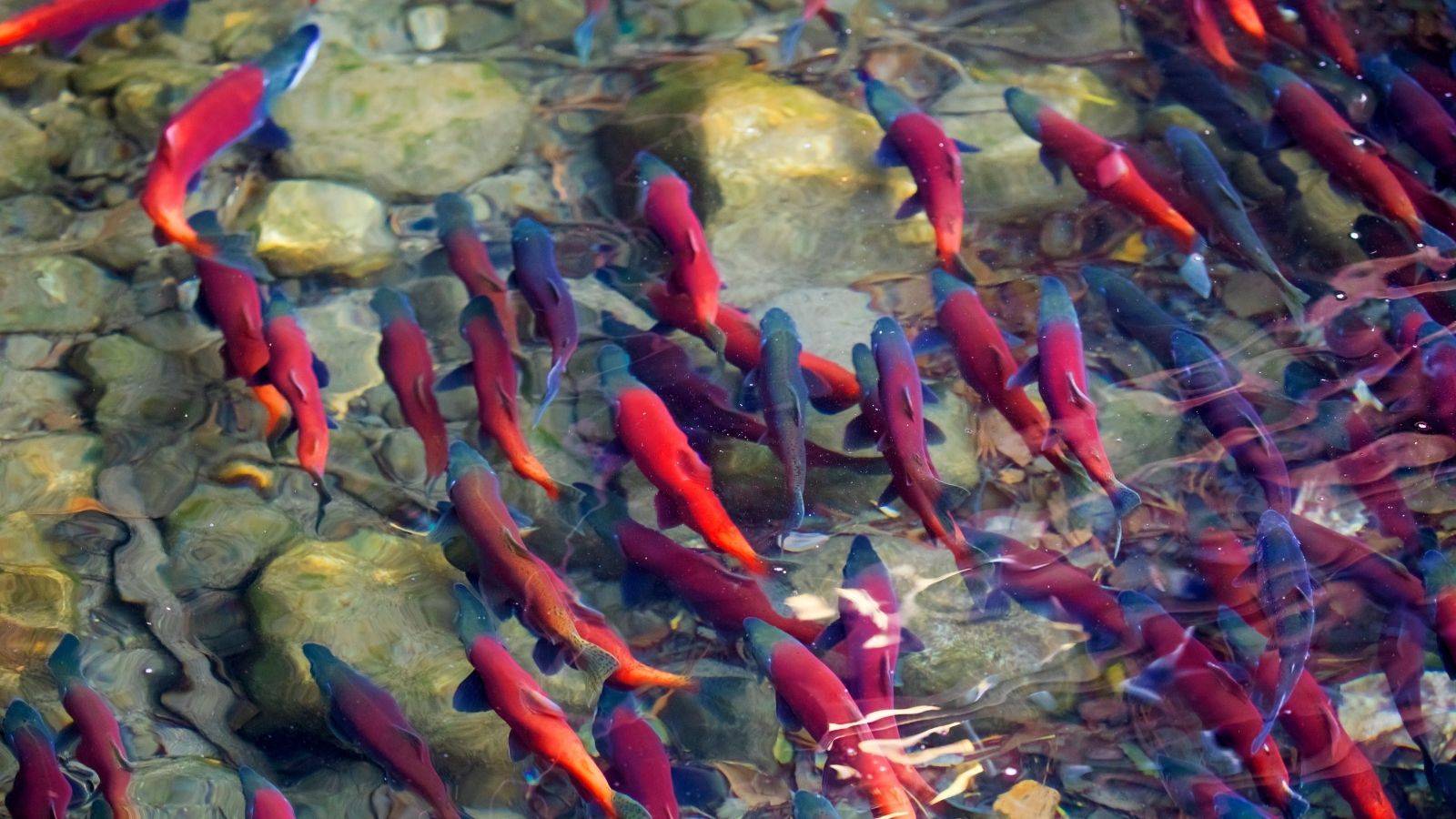 Meet Sockeye salmon’s quiet, introverted sibling, the kokanee. Kokanee salmon always manage to slip under the radar because unlike their anadromous counterpart, the Sockeye, they never make it to the ocean! The landlocked kokanee and Pacific sockeye salmon are said to have separated from each other following the last ice age about 15,000 years ago. The ice melt created many lakes in central BC (Thompson-Okanagan, Cariboo Chilcotin, the Kootenays) and this is where the kokanee dwell.

Alike in almost every way, the features of the kokanee and sockeye are nearly indistinguishable from one another with only one key difference - their size. Kokanee salmon are often smaller than sockeye because there are fewer nutrients available in freshwater. But much like the sockeye, their bright red colour peaks later in life. They are silver for most of their lives, and once they reach spawning age (3-5 years), they transform into beautiful, bright red…targets. Their amazingly flashy colour makes the kokanee into a walking bullseye for eagles, bears, and anglers.

Haunt you at night? 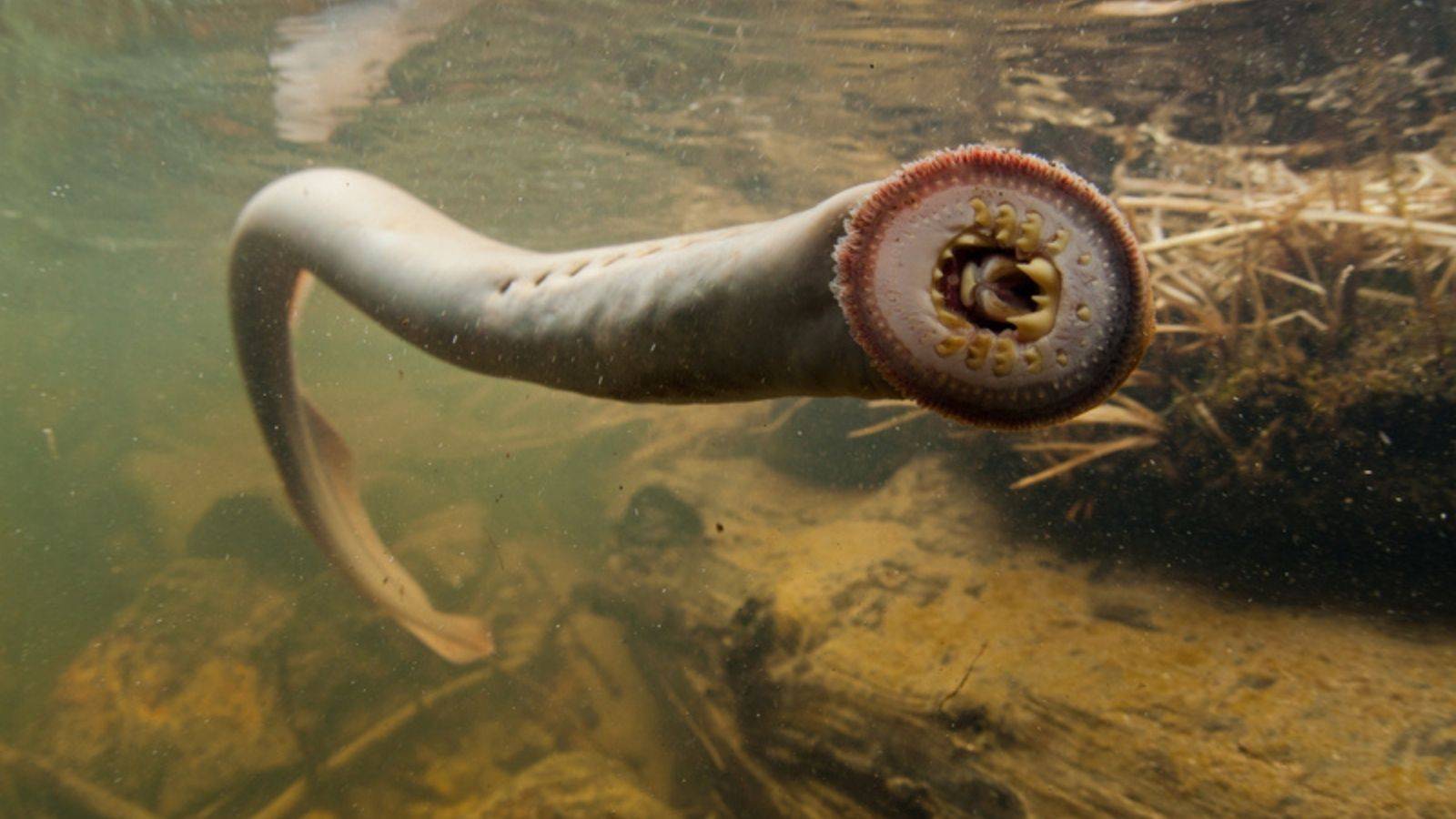 Truly a face only a mother could love. While the Pacific lamprey is not the most charming creature you’ve ever seen, you’ve got to respect their staying power. Not only can these XXXL size leeches literally suck sea lions to death, but they have also been around for some 450 million years…before dinosaurs, before trees, before Pangea.

Their name is derived from the latin word lampreda or “stone licker”. Being mediocre swimmers, they use their jawless…er, mouths, to fasten onto surfaces for rest while swimming upstream to spawn in the lower reaches of the Fraser River and other freshwater tributaries throughout the Pacific Northwest. In the States, the Pacific lamprey is in decline due to the presence of dams, culverts, and other infrastructure that obstructs their spawning patterns. They are not strong enough swimmers to make it through fish ladders and are not typically on the conservation priority lists. Fair enough, since they are one of the sockeye salmon’s biggest predators. They are not picky eaters, but they seem to prefer Sockeye, and will use their rows of teeth to latch onto their prey. Some species of trout and pike prey upon the lamprey, but they remain largely left alone by other species unless they are young enough to overtake.

They may not be as beautiful as the speckled Dolly Varden, or as bright and spritely as the kokanee, and are basically a neighborhood menace, but they are still a valued part of our food chain - always have been, always will be.