Petition to Save Marine Mammals and Wild Salmon

Petition to Save Marine Mammals and Wild Salmon 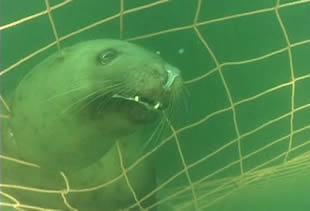 This photo is of a drowned sea-lion under a British Columbia salmon farm. Net-pen salmon farmers in BC waters have been responsible for shooting or drowning over 1900 seals, 700 California sea lions and 200 now-threatened Steller sea lions.

And these "nuisance kills" statistics are only the deaths voluntarily reported by industry.

For wild salmon and other fish, the real concern posed by these unnatural "salmon feedlots" are parasitic sea-lice that can kill migrating smolts, and infectious diseases like IHN, ISA, furunculosis and other diseases that spread like wildfire in the pens.

So why is California’s Aquarium of the Pacific partnered with two BC-based salmon-farming brands, Skuna Bay and Marine Harvest, and telling Californians their product is sustainable?

Sign the petition on the right and tell the Aquarium of the Pacific to stop promoting Skuna Bay and Marine Harvest!

In April 2014, Canada's sustainable seafood watchdog SeaChoice and the Monterey Bay Aquarium's Seafood Watch program both renewed their red listings of net-pen farmed Atlantic salmon, urging consumers to "Avoid" them because of the chemical-laced feeds, infectious diseases, sea-lice and marine mammal deaths that plague these farms.

Skuna Bay and Marine Harvest together own 84 salmon farms in BC waters, and earn millions selling their products to unsuspecting US consumers. Both corporations are partners in the Aquarium's "Seafood for the Future" program, and recommended under that program's "Branded Products" list.

Let's tell the Aquarium of the Pacific we think there are better products they can promote—and much better seafood options for southern Californians.

Make a difference today for seals, salmon and other wild Pacific species by signing and sharing the petition!

To learn more about the threats and impacts of BC’s salmon-farming industry, and how you can help further by sending us a salmon recipe, click here.

Dr. Jerry Schubel, as CEO of the Aquarium of the Pacific, we call on you to help save wild marine mammals and Pacific salmon. End your partnership with Skuna Bay and Marine Harvest—and join with Seafood Watch and other third-party watchdogs in telling consumers to avoid farmed Atlantic salmon.