VANCOUVER—More untreated sewage and runoff polluted Metro Vancouver waterways in 2017 than in any of the four years before, according to the latest Environment Canada data obtained by the Star.

Thirty-nine million cubic metres of wastewater from homes and businesses combined with urban rainwater runoff poured into local waterbodies last year — an increase of almost 23 per cent from the year before.

It’s a persistent issue in Vancouver and elsewhere in the country due in large part to outdated combined sewer systems. These systems, which collect and carry both rainwater and sewage, are sometimes overwhelmed during heavy rainfalls and forced to overflow to protect treatment plants from receiving more wastewater than they can handle.

While the city has set a goal of separating all its combined sewers by 2050, sewage continues to pollute local waters used daily by kayakers, paddle boarders, and dragon boat teams in the meantime. Almost 674,000 cubic metres of raw sewage and runoff drained into Vancouver’s busy False Creek at just one combined sewer overflow point last year.

The waterway that runs from English Bay east to Science World is used by more than 500 paddlers on any given summer day, said David Chin, the manager at Dragon Zone Paddling Club.

The boating centre, which is home base for more than 1,500 paddlers, is on southeast False Creek, close to Olympic Village.

Chin has heard stories of people getting pink eye or the occasional paddler who falls into the creek and has to shower immediately. And four years ago, E. coli levels were recorded at levels 25 times higher than what’s deemed safe for swimming forcing the dragon-boat club to shut down its operations for part of the summer, he added.

Chin wants to see the water quality improved, but the club has no plans to relocate and the incident hasn’t deterred people from joining the 30-year old organization, which has welcomed hundreds of new members in recent years.

“It is one of the few protected areas we have in Vancouver,” he said.

“We know that they impact water quality in False Creek, where the water is quite stagnant,” he said, but the city has been working hard to eliminate them.

As of earlier this year, the city has separated about 55 per cent of its combined sewers with plans to separate another 5.8 km this year.

But there’s a long way to go before False Creek could be considered safe for swimming, which is a major goal for the Fraser Riverkeeper, a local organization dedicated to protecting the Fraser River watershed.

For now, they just want to make sure as much water-quality information as possible is available to those using it, like paddlers. 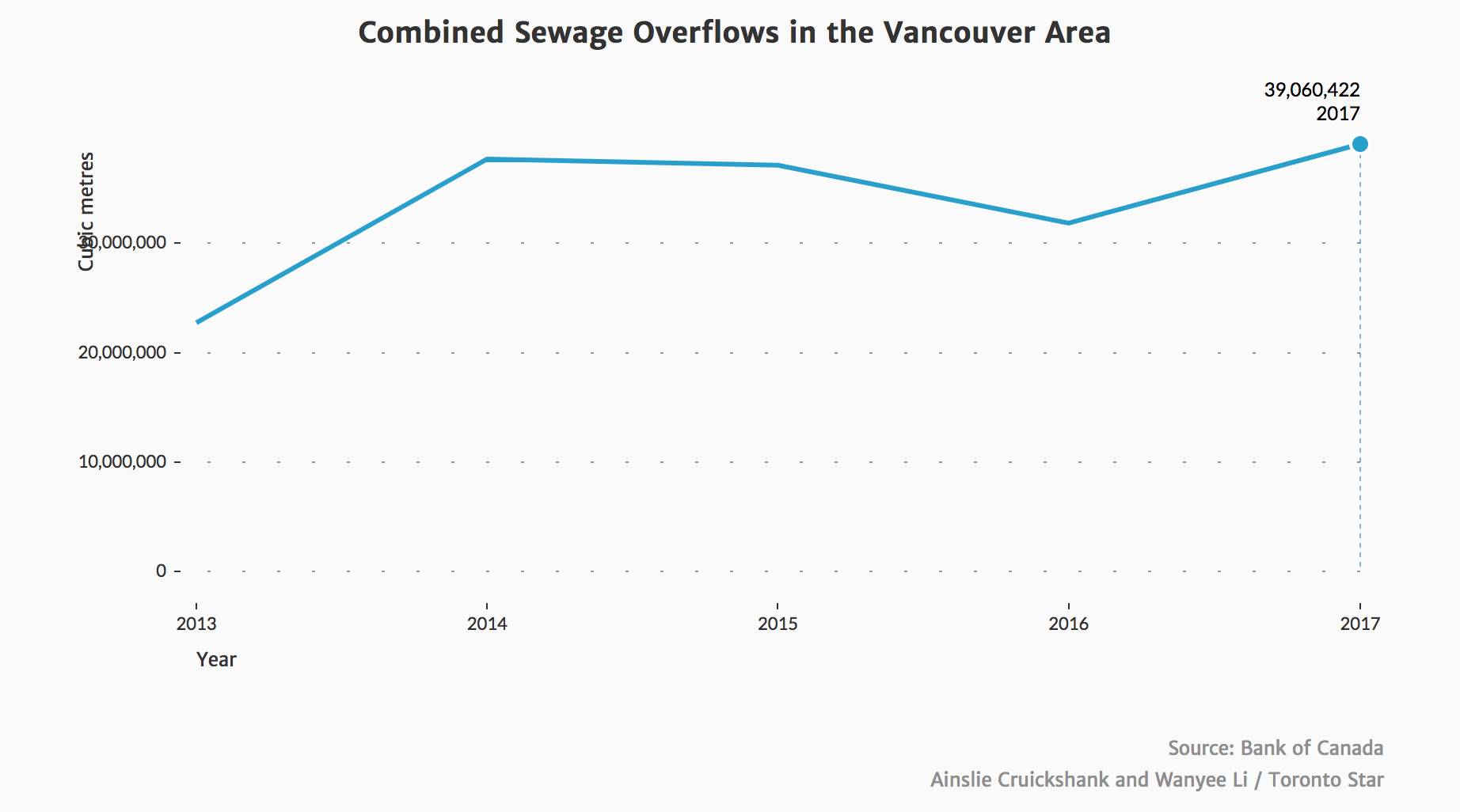 This month the Riverkeeper and Swim Drink Fish Canada are launching a new weekly water monitoring program to supplement the monitoring already conducted by Metro Vancouver at three False Creek sites each week in the summer.

“We know that summer happens by the water,” said Lauren Brown Hornor, a board member with the Riverkeeper and the regional representative for Swim Drink Fish Canada. And, “False Creek really is the heart of Vancouver.”

Through its False Creek water monitoring program, the Riverkeeper will sample water from seven sites in False Creek each week through to October. The results will be available weekly on the Swim Guide app.

Their sampling program will run longer than Metro Vancouver’s program, with the goal of monitoring the change in water quality after heavier fall rains. Most of the overflows last year occurred in the months of October, November, January and March. The lowest flows were between June and September.

On Thursday morning, under a hot sun, Brown Hornor and Lauren Duboisset-Broust, the Riverkeeper’s Vancouver water monitoring co-ordinator, set out in a small motor boat for their first round of sampling.

Over the course of two hours the boat’s captain stopped and shifted out of the way at each of the seven sites as Duboisset-Broust unsealed a small sample bottle and leaned out over the back of the boat. She dipped the container about 30 cm below the surface and collected roughly 100 mL of water.

She twisted the lid back on the jar and sealed it in a bag before placing it in the cooler, which is kept between -4 and -3 C. While the Riverkeeper plans to analyze its own samples moving forward, due to to a missing piece of equipment Duboisset-Broust wasn’t able to analyze the samples collected Thursday. She collected new samples the following day and had those analyzed by an accredited lab.

The results were unexpected. They ranged from 3 to 36 E. coli units, below even the recommended maximum E. coli levels for swimmable water. The Riverkeeper’s results were significantly lower than the results of Metro Vancouver’s sampling the same day.

Duboisset-Broust said there a number of reasons why their first results could be different from Metro Vancouver’s.

“The concentration of E. coli can be very different from one place to another,” she said in an email Monday to the Star, adding that the Riverkeeper’s samples were taken during low tide, which also could have affected the results.

False Creek is a no-swimming zone, regardless of the Riverkeeper’s low E. coli results, though some brave souls do dive into waters in the area.

Stephen Paetkau, who co-owns Skookum Yacht Services with his brother, performs at least 300 dives in False Creek every summer to repair boats.

The murky False Creek water changes colour every day, he said, describing himself as “a connoisseur of the one-thousand-and-one different shades of blue, green, black, and red that False Creek turns all year round.”

A few years ago, he opted to wear a wet suit instead of a drysuit — which means his skin is in full contact with the water.

“People think, this guy is swimming through human sh-t,” he said. But the water quality in False Creek is getting better, said Stephen, who has been diving since 1989.

“I am fully immersed in False Creek water. I work in a boatyard, I have open cuts — and I have never ever had so much as an infected cut.”

One reason for the improvements he’s noticed could be new efforts to stop the many boats anchored in False Creek from dumping their own sewage straight into the water.

The Paetkaus have a contract with the City of Vancouver for its mobile pump out service, which it offers to boaters for free. The feedback from boaters has been overwhelmingly positive, he said. During peak season, the brothers visit dozens of boats every day.

“The city is relieving people of a really smelly burden that they would otherwise have to dispose of themselves or illegally dump,” he said.

For him, there’s a bigger issue in False Creek: plastic waste. Paetkau said he pulls plastic from the area every time he dives.

“People are careless about their waste. Car keys, needles, bags, candy wrappers. Over the long haul, that’s probably a bigger problem,” he said.