School’s out and the summer is just beginning for many, but the sockeye salmon migration season has ended for the Salmon Early Marine Survival Program (SEMSP).

Salmon Coast Field Station (SCFS) hosts researchers from SEMSP, who had their last day of sockeye salmon sampling for the 2017 season on July 12. SEMSP monitors the health and abundance of Fraser River sockeye salmon. These fish emerge as fry from the Fraser and its tributaries, and migrate out to the Pacific Ocean. It is thought that the majority of Fraser River salmon pass through the “bottleneck” of Johnstone Strait, where SCFS SEMSP researchers conduct their work. On July 12, the crew visited its six monitoring sites throughout the Strait, located near Cracroft Point and Bauza Cove.The team uses a mini purse seine net to capture schools of salmon. There are still other species of salmon at the sites, like chum and pink, but the sockeye have left Johnstone and are continuing on their outward migration. (This area also channels other species through it; it is a common spot to glimpse orcas, humpbacks and other cetaceans. Check out a live feed of the area here: http://explore.org/live-cams/player/orcalab-cracroft-point-surface). 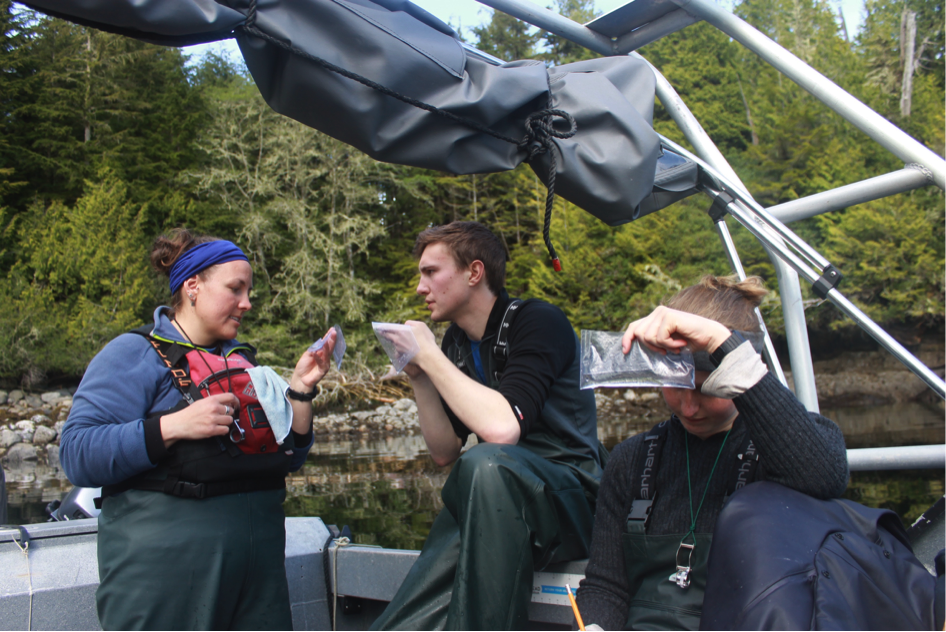 The SEMS Program is a collaboration between researchers and students from a variety of institutions, including SCFS, Hakai Insitute, UofT, UVic, SFU and UBC. These biologists are attempting to learn more about the juvenile life stage of sockeye because little is known about their early marine survival. Every year, salmon emerge from their natal streams as fry in massive numbers, but the proportion of juveniles that make it to adulthood is low. This could be due to predation, water quality, food abundance and anthropological effects. It is hypothesized that Johnstone Strait is a “food desert” for the fish, an unproductive zooplankton zone. This is explored by taking samples of juvenile salmon for lab analysis. Factors like DNA, stomach contents and parasite load (such as sea lice) are examined. The team also conducts oceanographic sampling for elements such as zooplankton abundance, temperature, and salinity, all of which may contribute to salmon survival. In addition, SEMSP sampling provides information about schooling behaviour, as the team records the composition of groups of salmon when captured.

Fraser River sockeye salmon may school with chum, pink, and coho salmon from this region, local herring, and other species. This data is compared with the information collected by their partner SEMSP team located in the Discovery Islands. This island group is an earlier point in the sockeye migration.

This project presents a picture of the immense challenges salmon must overcome to complete their migration. FRK initiatives to improve water quality, conserve and restore salmon habitat at the beginning of salmon migration are crucial. If fish are prematurely forced out of their natal streams, underfed or diseased when they exit the Fraser, there is no way they will be able to complete their migration. Wastewater, garbage and pollution release pathogens and bacteria into the Fraser watershed, which negatively impact the juvenile salmon.