Join guest-blogger Griffin Kelly as she researches the influence of aquaculture on community in the Broughton Archipelago, BC.

My name is Griffin Kelly; I am an undergraduate student at the University of Toronto. In 2013, I spent a summer interning at Lake Ontario Waterkeeper (LOW). At LOW, I was able to connect my love for canoeing and swimming in Ontario’s lakes to an understanding of the water protection measures that enable my favorite activities. From that point onward, I have been passionate about environmental policy and conservation initiatives that protect Canada’s water and other natural resources. As a Canadian Studies and Peace, Conflict and Justice Studies student, I explore these topics within my programs and independent study courses. 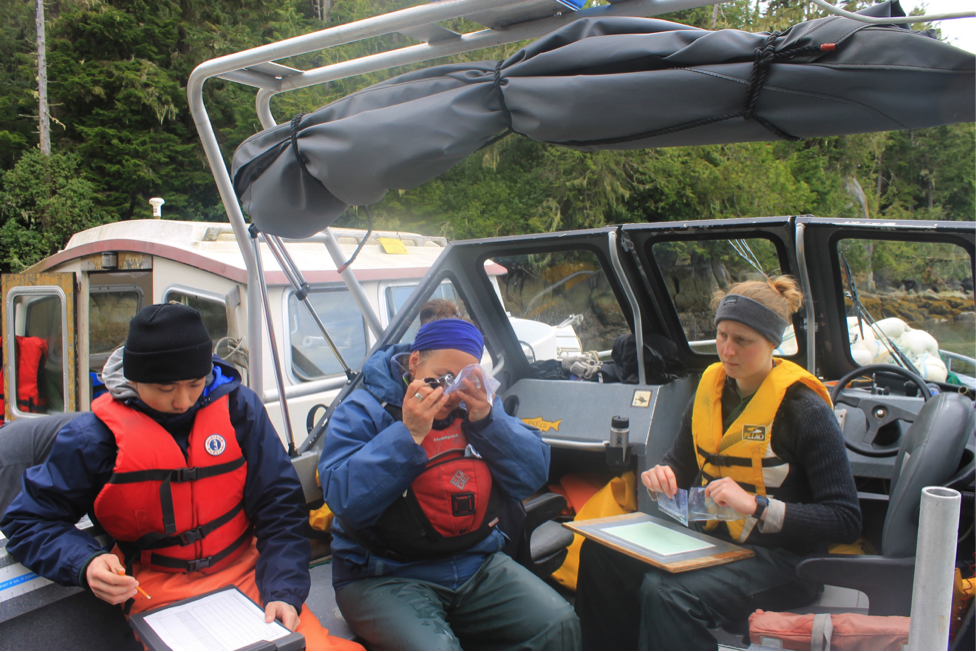 In 2016, I had the opportunity to spend the summer completing a research project at the Salmon Coast Field Station (SCFS), with UofT’s Ecology and Evolutionary Biology department. I am currently spending my second season at Salmon Coast, in the Broughton Archipelago, located in the unceded territories of the Musgamagw Dzawada’enuxw First Nations. Salmon Coast hosts academic researchers and community members who work on issues concerning wild salmon, marine mammals and changing habitats. Salmon Coast has allowed me to engage with scientific research that I typically do not have access to as a humanities student. It has cemented my interest in bridging the gap between ecological research and Canadian environmental policy through advocacy and community outreach. Salmon are a crucial species on the British Columbia coast – they act as a food source for a variety of animals and people, and as a source of nutrients for the coastal forests. To put salmon at risk is to threaten many vibrant communities and ecosystems.

The Broughton has been home to logging, the wild salmon fishery, and in the last several decades it has become a concentrated site for aquaculture, with several multi-national corporations utilizing this area for open-net Atlantic salmon farms. A major research focus of Salmon Coast is sea lice. Sea lice are a naturally occurring ectoparasite that feed on salmon. Salmon farms provide a good habitat for sea lice populations to grow, due to the high host density on farms and lack of natural regulatory processes that remove infected fish (Frazer 2009). In addition, farms contribute to salmon habitat degradation from farm runoff of pesticides, pharmaceuticals and sewage (Schreiber 2006). Farms treat their fish with a pesticide called “SLICE,” the industry name for emamectin benzoate, a chemical that is toxic to sea lice. The use of SLICE is a major concern for the ecosystem, as SLICE is also toxic to clams and other shellfish, which are a crucial part of regional First Nations traditional gathering practices. In addition, lice on farms in Atlantic Canada, Norway, and Chile have developed resistance to the chemical, making it difficult to control lice populations (Lees et al. 2008). My project last summer focused on DFO SLICE policy, and I conducted an experiment to monitor the efficacy of SLICE, on lice gathered from wild salmon. My test and previous SCFS studies have not found any change in SLICE efficacy.

My research goal this summer is to investigate the community impact of aquaculture on this territory. Last summer, through policy and literature review, I had the opportunity to engage with the debate between academic and DFO researchers on the effect of fish farms on the ecosystem. This year, my interest is focused on the people who live and work within the community. My interest comes from my academic background in human security and systems of care, in addition to environmental policy.  I plan on conducting interviews with community members in order to investigate the effects of salmon farms on daily life in the Broughton. I am interested in individuals’ perspectives on the changes they have witnessed as aquaculture has entered this territory.