Salmon Coast Field Station did double duty on May 9th as both scientific research station and polling station for the BC provincial election. 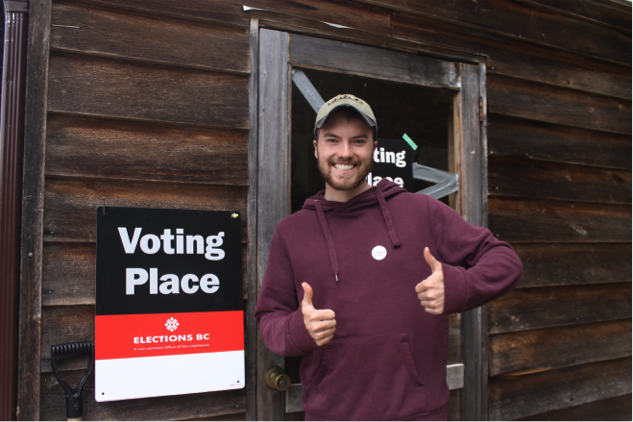 Salmon Coast is located in the North Island riding, and the station had only 30 registered voters. This section of the North Island riding is on the forefront of many major election issues, such as environmental regulation and industries like logging, aquaculture and wild fisheries. The effects of governmental policies are concentrated in this area, which carries little electorate power in comparison to major urban centers like Vancouver, Victoria and Kelowna.

The polling station hosted community members from Echo Bay, Nimmo Bay and the surrounding area to vote in the North Island riding and absentee voters from across BC.

Several station-users had the opportunity to vote, including first time BC voter, Dylan Smyth (pictured above). Dylan is originally from Edmonton, and has moved to BC to work in ecology. He cast his vote at SCFS as an absentee voter for his home riding of Vancouver-Mount Pleasant. Dylan voted with consideration for issues of natural resource usage, habitat conservation and water protection measures.

The election was an opportunity to engage in community conversation about the issues that are of importance to this area, and to consider at SCFS how our roles as researchers can play a part in governance. From my point of view as a humanities student, I am conscious of the political nature of my writing and focus on certain issues, but my goal is to create policy change through my work. In contrast, my scientific counterparts at the station have taught me about the necessity for their work to be objective, in order to strengthen their papers and be respected by their professional community. For example, lobbying or aggressive advocacy may be perceived by peers to introduce bias into one’s research. A major concern is that science as a discipline is respected by a government. Many cited the treatment scientists received under the Conservative government as an example of this issue, such as suppression of research results and dramatic cuts in funding. Similarly, the March for Science in Washington in April 2017 intended to amplify the role of science as a whole in policy-making decisions.

We await the final results from BC election, which should be announced mid-week.