"We want to preserve what we've got here": Chilliwack community out in force to clean up Fraser River shores

Ross Aikenhead’s pickup truck rumbles up the river bank and stops in front of a huge garbage bin. As rain falls in sheets from a grey sky that’s almost indistinguishable from the Fraser River a few metres away, he lowers his tailgate to unload soiled carpets, broken pallets and several bags of trash.

Volunteers clean up garbage on the banks of the Fraser River in Chilliwack as part of the 10th annual Fraser River Clean Up. GLENDA LUYMES / PNG 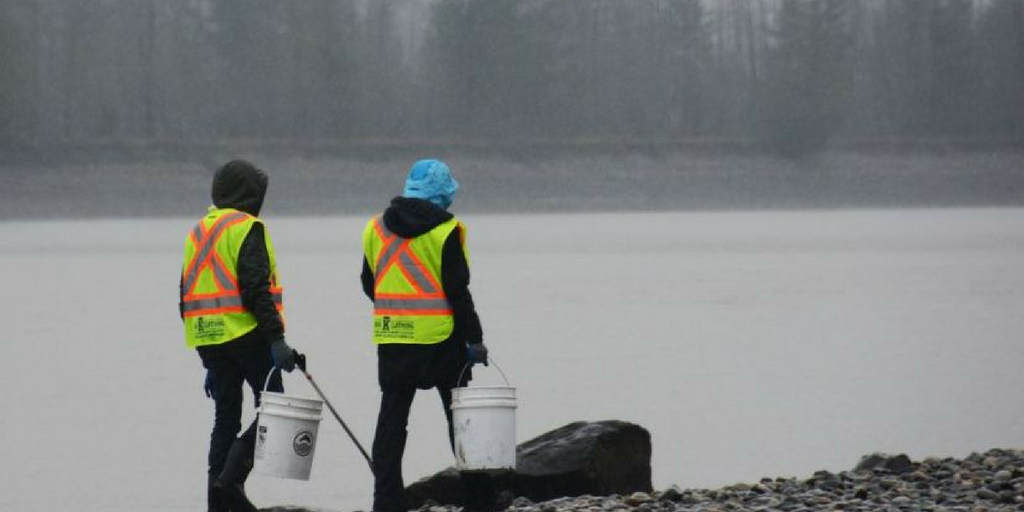 “We’re seeing less burned-out cars this year, so that’s a good thing,” said his wife Kathy, disembarking from the passenger door. “Kids like to burn them down here, but maybe there’s been less parties because of the weather.”

Growing up in Chilliwack, the couple knows a thing or two about the wild parties on the riverbank. But as they’ve grown older, they’ve come to appreciate this place at the end of Gill Road in a different way.

They often bring their grandkids here to ATV and enjoy a campfire where the sandbars stretch for kilometres along the Fraser’s south shore.

“We try to leave it better than we found it,” said Ross, who didn’t let a broken hip stop him from joining hundreds of volunteers at the 10th annual Fraser River Cleanup on Saturday morning.

“We want to preserve what we’ve got here and take care of it,” added Kathy.

After a brief stop, the couple got back in their truck and headed out to a stand of cottonwood trees littered with the remains of a bush party. Other volunteers spread out on foot, combing the shoreline for garbage as a cold rain turned puddles into pools of silty water that eventually began carrying away the trash.

“It’s so important for this cleanup to happen,” said Chilliwack Mayor Sharon Gaetz, who had to skip the event to attend the funeral of former Abbotsford mayor George Ferguson. “When the freshet comes in May or June, all that garbage washes downriver and then it’s too late.”

The mayor applauded the volunteers who “roll up their sleeves and put on their boots and get out there. I think word is getting out that if you like to recreate in these areas, we need your help to keep them clean,” she said.

The city waived the landfill fees for the event, which is coordinated by the Fraser Valley Illegal Dumping Alliance, the Fraser Riverkeeper Society and Woodtone, a Chilliwack building materials supplier. Over the last nine years, the annual cleanup has collected 88 tonnes of garbage from the riverbank.

Organizer Joe Daniels said Saturday’s total haul won’t be known for a few days, but the river was “as bad as I’ve ever seen it.”

The problem is complex, with no single culprit to blame.

Volunteers found piles of residential garbage, including the remains of a girl’s birthday party and a bag of dirty diapers, in addition to construction waste, beer cans and shotgun shells. Daniels has seen grow-op and meth lab waste in the past, asbestos from companies unwilling to pay for proper disposal, and abandoned homeless camps.

“It can be discouraging to see the same problems every year,” said Daniels. “But then I look at all the parents coming out with their kids and I’m hopeful that there will be a generational shift, that people will understand there are implications to our actions.”

Jessica Poh and Jessica Yarwood, both members of the Freshwater Fisheries Society of B.C., were cleaning up the remains of a huge bonfire. Yarwood brought her two kids, hoping to teach them about community responsibility.

“It’s really cool to see hundreds of people out here working together,” she said. “I hope some of the people who use this area will see what we’re doing and be inspired.”