Posted on September 8, 2020
This was posted more than 12 months ago. The information may be outdated.

Birds do it, bees do it…got a feeling even sailors on the high seas do it. Fall in love? No, I’m talking about poop.

Isn’t it so beautiful we all share this stunning natural act? The great equalizer? The subject of the first joke on earth? Ok, maybe stunning is going a bit too far, but we can all agree on one thing – everyone poops.

Since I started with Fraser Riverkeeper, I think about poo at least 100% more than I did before. Every week I walk along False Creek collecting water samples to test for E.Coli – in other words, I’m testing seawater for fecal contamination. And guess what, it’s there. So naturally, I’m always wondering where the poo comes from.

There are a variety of pollution sources in our urban waterways. There are combined sewer outfalls, thousands of pooping geese and other wildlife, illegal dumpers, sewer outfalls we might not even know about, contaminated stormwater events, and a deep history of industrial activity in a body of water prone to water stagnation.¹

Safe to say False Creek has a cocktail of variables contributing to its historically poor water quality. But as I walk along the water every week, I can’t help but notice one thing – there are a lot of marinas full of large pleasure crafts, fourteen to be exact, and a lot of people living aboard boats in False Creek. So what do they all do with their poo?

I took my questions to two people I knew would have the answers: The Skookum Brothers. Jonathan and Stephen Paetkau run Skookum Yacht Services located in Granville Island. They fix, install, and maintain just about everything boat-related and are long-time locals in the False Creek marine community. For three years, they have run a free waste pump out service for False Creek boaters through a partnership with the City of Vancouver. Amelia, Skookum employee and Paetkau kin was kind enough to let me tag along with her while she operated what they call "The Poo Boat" (image left).

After spending an afternoon with them, here’s what I learned from the Skookums:

Getting Rid of Poo

There are a handful of ways boaters get rid of their wastewater. Most boats have holding tanks, which can be pumped into an on-shore facility, and some have a Y-shaped valve with the ability to either store waste or directly release the contents of the holding tank into surrounding water. There are older boats (built pre-1977) without installed holding tanks, which directly discharge wastewater into the water. But at this point, most boats have a MSD III holding tank and there are plenty of boaters who choose alternative options for their vessels, such as other marine sanitation devices, composting toilets, or portable toilets. With the exception of composting toilets, wastewater pumped from holding tanks or dumped from portable toilets eventually ends up in a municipal wastewater treatment facility just like regular household waste. 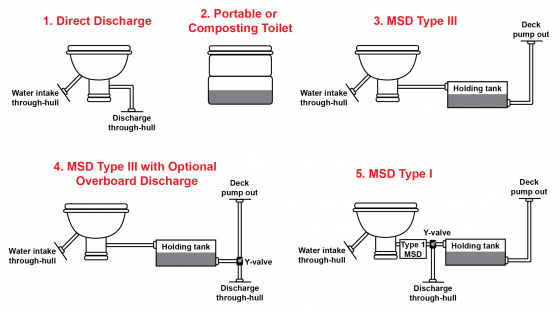 The act of pumping out your holding tank has a bit of a learning curve, but if you’ve done it once, you’ll do it again, because it’s really not as scary or as gross as you might think. Plus, there are plenty of services that will do it for you. Here’s a list of boat pump-out stations the City of Vancouver put together. The Skookum Bros are first on the list!

Imagine you leave a tupperware container full of food out in the sun for a few days. It’s going to go pretty bad. A lot worse than if you had it in the fridge. OK, now imagine instead that it’s poo in a tank…with other poo…over the course of a few days in the hot sun. Now it’s going to go really bad. The difference between regular household sewage and sewage stored in a holding tank is that sewage stored in a holding tank is going to be a much better breeding ground for pathogens like E. coli. Household waste is diluted and sent to a treatment plant more or less immediately, whereas the countless pathogens in a holding tank are left to proliferate in the favorable conditions of a warm, enclosed space.

Sewage from boats, otherwise known as "Blackwater", can cause an influx of nutrients into coastal waters if not properly disposed of. Depending on the amount, dilution, and treatment of sewage, blackwater has the ability to cause algal blooms, release toxins into the marine food chain, and put swimmers in harms way due to contaminated waters.

The best practice for disposing of sewage is to use a holding tank and regularly pump out the waste at a marina or pump-out service. If boaters don’t have access to a pump, it is the best practice to use a Marine Sanitation Device (MSD), get as far away from shore as possible, and release sewage while traveling at speed.

The composting marine toilet is an excellent alternative to a holding tank as they eliminate the smell of sewage, are relatively simple mechanical devices, and take up a fraction of the space a traditional enclosed head with plumbing and a holding tank would. Plus, you could start an on-board flower garden with all the nutrient-rich soil you create.

The Georgia Strait Alliance put together a comprehensive Guide to Green Boating if you’re interested in learning more about reducing your impact on the water.

Just how far away from shore are you supposed to get? Well, unlike our neighbors to the south, Canadian laws around sewage and grey water are well-intentioned but hold little legal weight. It’s illegal for boaters to dump untreated sewage within three nautical miles of shore (about 5 km), unless pump-outs are not available, and you cannot get three miles off-shore.² See how that could be open to interpretation?

Enforcement of such laws further complicates the issue. In the United States, it is illegal to dump untreated sewage within 3 nautical miles of shore and it is enforced enough to strike fear in most people’s hearts.³ Since it is enforced, the pump-out resources available to boaters are not only required by law, but they are also a lot more readily available. Canada? Not so much. The resources required to identify and charge sewage culprits too close to shore are far beyond the capacity of a country with a sparsely populated but vast coastline.

The best we can do is go that extra mile (literally), accept responsibility for our own waste, and respect one another and our environment. Clean conscience = clean waters.

Stay tuned for What Do We Do With The Poo? Part Two: Poo Close To Home where we talk False Creek boaters, sewage dumping in Vancouver, and the challenges of ditching doo doo in Canada.

Imogene Broberg-Hull is our water monitoring coordinator. She runs our water monitoring hub here in Vancouver. She studied urban design at Dalhousie University and is passionate about urban waterways, marine communities human or otherwise, and striking harmony between built and natural worlds. Growing up on the water, Imogene has a strong connection to the ocean. Her watermark is Səl̓ilw̓ət (sway-let) or “Indian Arm”.