What Gord Downie Taught Me (and the Swim Drink Fish Community)

Tonight, the Tragically Hip will be taking the stage at Roger's Arena for their final performance in Vancouver. In honour of Gord Downie and his tremendous leadership in the Canadian Swim Drink Fish community, we are sharing this heartfelt post from Fraser Riverkeeper's President and Lake Ontario Waterkeeper, Mark Mattson (originally posted July 22, 2016).

My friend Gord Downie is sick. Gord is someone I have known for over 30 years. Someone who supported my decision to quit the law to become a Waterkeeper. Someone who gave Waterkeeper's Swim Drink Fish vision meaning and force in Canada.

It’s been 8 months since he found out. Tonight he continues to fight his illness by taking the stage to sing again. And with that, he will start the healing for his friends and fans as well. It's what he does.

For many months, Gord and his family have struggled with trips to the hospital, doctors offices, drug stores. And quietly explaining to friends and neighbours what is going on. Not easy. Add to it, the public announcement of “terminal brain cancer” a couple months ago - and everything went to another level.

Gord’s face, image, diagnosis was everywhere. On every TV, newspaper, radio. People reacted on many levels. Many wanted to share their experiences of the music, the meetings, the impacts Gord had on their lives. And with the announcement of a national tour, people started planning to go. 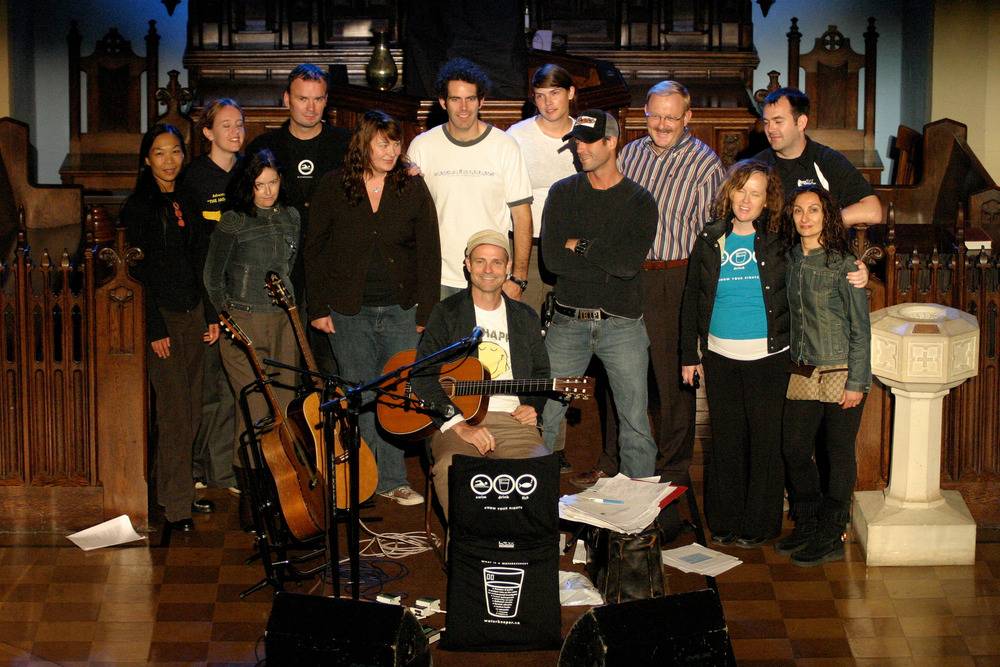 Gord Downie (centre) and Mark Mattson (third from the left, back row) with the Heart of a Lake crew after the final show of Waterkeeper's tour in 2006. Photo by Dylan Neild.

Tonight in Victoria BC, Gord will be singing and performing again because he is Gord Downie: a great father, son, brother, dad, husband and friend. Because he is the one who worries about others and looks after the people around him. Because he is a leader, a caregiver, a thoughtful one. Because he is the guy who always does the dishes after dinner.

I often talked to Gord about literature, water and Northrop Frye. He is a good listener. But I was surprised to find a song dedicated to Northrup Frye on an album a few years ago. I shouldn’t have been.

Gord’s musical language is symbolism and imagery. A language without argument. In short "The language of love" which Northrop Frye said will "last longer than most other forms of human communication.”

Gord’s sickness gave me and most of Canada a bad dose of love sickness. And while there is no cure, the treatment is basically to keep "singing" your song. That is what Gord is doing this summer. And in doing so, he is again helping show the way.

No matter who you are, keep doing what you love. It's what we do.